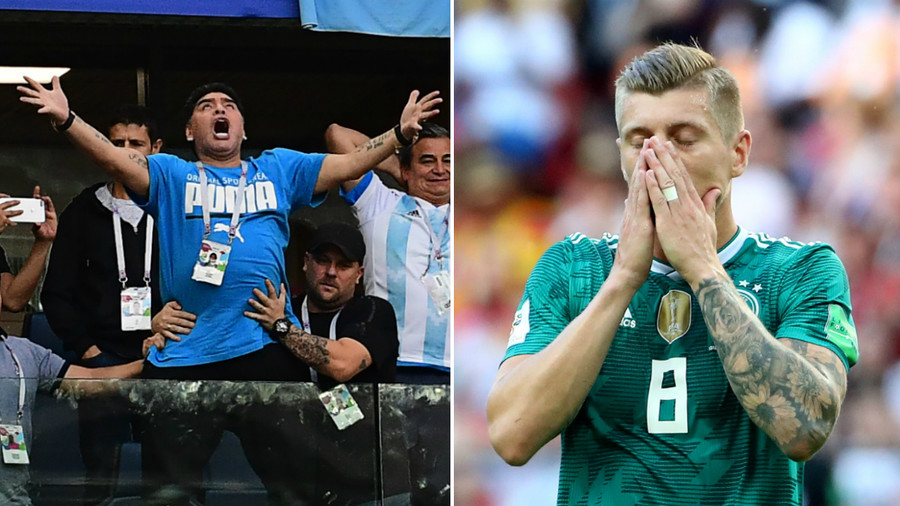 The World Cup enters the knockout rounds on Saturday, having seen a thrilling group stage that some have hailed as the best ever. RT Sport looks back at the most-discussed moments so far, both on and off the pitch.

The tournament kicked off with some controversy from British pop star Robbie Williams at the opening ceremony at Luzhniki Stadium in Moscow. The singer inaugurated the 2108 global football tournament and, in front of 80,000 spectators and millions of viewers, unexpectedly popped up his middle finger to a camera on the field.

This sparked an avalanche of comments on social media, many wondering who the gesture was meant for. The 44-year-old later (jokingly) explained on ITV’s ‘This Morning’ show that he was merely giving the signal that there was one minute to go until kick-off.

Brazil star Neymar was subjected to jeers from some fans, who compared his new World Cup trim to a bowl of pasta. Some joked that the new hairstyle resembled a pot noodle dish, while others insisted that the player looked more like a cartoon ghostbuster. The caustic remarks didn’t go unnoticed by the world’s most expensive player, as the PSG man had cropped his mop for the next match, against Costa Rica, which Brazil won 2-0.

Switzerland’s World Cup win over Serbia in Kaliningrad was overshadowed by celebrations made by the two goalscorers, Granit Xhaka and Xherdan Shaqiri, both of whom are of Kosovan-Albanian origin. Both players made a winged salute when celebrating their goals in the 2-1 win, symbolizing the eagle on the Albanian flag. Shaqiri’s boots were also decorated with the flags of Switzerland and Kosovo – the breakaway region that is not recognized as independent by dozens of countries, including Serbia and Russia. The Serbian football association demanded punishment for the two players, although FIFA opted against a ban, instead fining the pair CHF 10,000 (US$10,000).

Argentina football icon Diego Maradona went on a rollercoaster of emotions during his team’s final group stage game against Nigeria, varying from a disappointed grimace to crazy celebrations, including a double middle-finger salute to the crowd, when Argentina clinched a late 2-1 win to book their spot in the last 16. He later revealed he had needed medical attention during the game. The 57-year-old had already caused a storm of Twitter memes, after an image of him crossing his chest during goal celebrations went viral. Memes depicting Maradona flooded the internet, with the scandal-prone football icon being placed in humorous well-known scenes, from Titanic to Queen's Bohemian Rhapsody video, to wrestler The Undertaker's entrance.

One of the tournament’s biggest shocks so far came from reigning world champions Germany, who were sensationally eliminated at the group stage. Die Mannschaft got off to the worst possible start in Russia, losing their World Cup opener to Mexico 1-0. Germany’s second group stage match against Sweden was a nail-biting thriller, with the defending champions avoiding a draw by scoring a last-minute goal to revive their chances of going through.

However, their reprieve proved short-lived and they suffered defeat to South Korea, who sensationally beat them 2-0 in their final group game, sending the Germans packing at the first hurdle, for the first time since 1938.