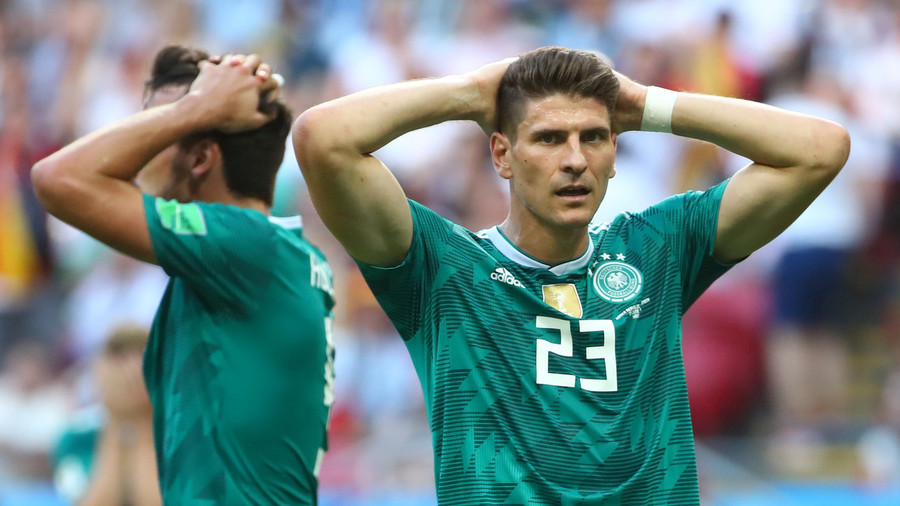 Germany’s World Cup defense ended with a whimper in Kazan, as two late goals from a spirited South Korea condemned Joachim Low’s men to a humiliating early exit from Russia 2018.

For the first time since 1938 Germany have failed to advance past the group stage - and they have no one to blame but themselves. A late goal, correctly awarded by VAR, from Kim Young-gwon and a 96th-minute strike into Manuel Neuer’s empty net from Tottenham’s Son Heung-min, consigned the defending champions to defeat and brings their run in this calendar year to just one victory from nine matches.

In truth, they rarely threatened throughout the game. They failed to force the South Korean goalkeeper to perform heroics, nor were attacks repelled with the aid of the Korean crossbar. Instead, Germany simply weren’t good enough.

Despite dominating possession for periods early on, Germany never really took the game by the scruff of the neck. Toni Kroos, the hero against Sweden, was unable to reproduce the heroics which saved German blushes last week while Thomas Muller, so often the team’s talisman, paid the price for his drop in form by starting the match on the bench.

Germany’s Manuel Neuer, often heralded as the top goalkeeper in world football, has been uncharacteristically error-prone in Russia and was almost responsible for a South Korean strike in the 19th minute as he spilled a free-kick in the direction of Son, though the record Korean scorer in English football history was unable to capitalize.

As news of a Swedish strike against Mexico began to filter through early in the second half, Germany appeared to make a concerted effort to up the tempo with Joshua Kimmich going close from a Toni Kroos cross. Timo Werner, who was ineffective throughout, pushed a volley wide shortly after.

Low decided to throw caution to the win, bringing on striker Mario Gomez for Sami Khedira and while the substitute went close with a header on 68 minutes, the gaps left by the departure of the Juventus midfielder began to tell as the South Koreans poured forward at every opportunity.

Mats Hummels had Germany’s best chance in the 87th minute but his header was off-target and as the assistant referee held up the stoppage time board reading six minutes of play left, it seemed likely that Germany would be able to carve out at least one more chance to keep their World Cup hopes alive.

Not so. Instead it was the Korean outfit who prospered, as a terrible mix-up in the German box allowed Kim to score a simple goal from inside the six-yard box. It was initially disallowed for offside but a VAR replay showed that the ball had been played to him by a German defender.

Son confounded Germany’s woes, scoring into an empty net as Neuer pushed forward in the 96th minute with a goal which has instantly created a crisis in German football.

Sweden’s win against Mexico places them atop the group, with Mexico qualifying in the runner’s-up position. Germany, meanwhile, finish bottom of the group and have become the fourth champions in the last five tournaments to be eliminated in the group stages.