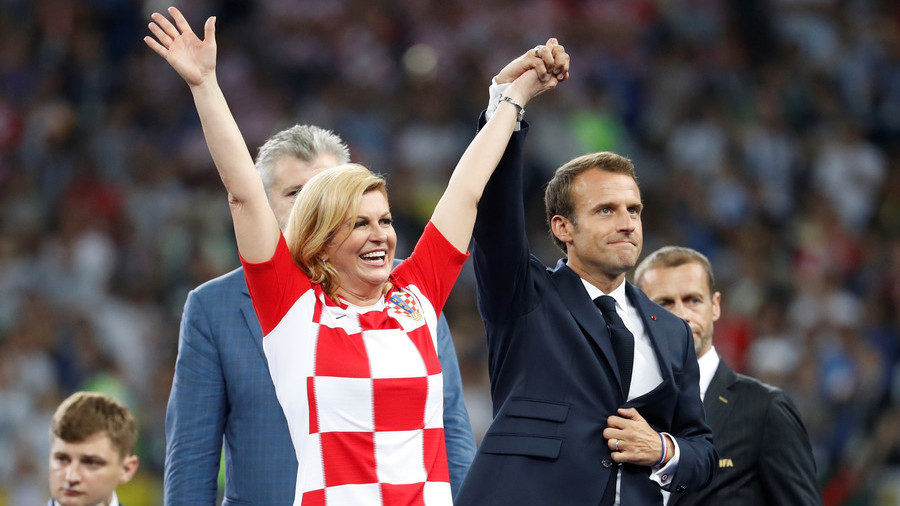 Croatian President Kolinda Grabar-Kitarovic became an unlikely star of the Russia 2018 World Cup with her flashes of fervent support for the eventual losing finalists, endearing herself to football fans all around the world.

Grabar-Kitarovic is already a star in her homeland, having become the youngest ever president of the country when she was appointed in 2015 at 46 years of age. She won over watching fans with her fervent support of the tiny nation on the Adriatic coast on their march to the final.

The president could be seen mixing with fans in economy class on flights and in the supporters section of the stadium during the tournament, but also made her presence felt from the VIP box, where she wore the famous red-and-white checkered jersey.

This is the lady who inspired Croatia tonight. She was present. She shouted horse. She screamed. She jumped. She shook Dimitr's hand. Yes, she is more than a mother to the Croats. Hail Kolinda Grabar-Kitarović. pic.twitter.com/H4QeNvh5z7

It was reported that of the over 250,000 online mentions worldwide of the country during Sunday's final in Moscow, Grabar-Kitarovic was written about more than any player, receiving 25 percent more mentions than team captain and Golden Ball winner Luka Modric.

So from the cheers to the tears, RT Sport gives you the rundown of Grabar-Kitarovic's signature moments that etched her name into World Cup 2018 history.

We kick off in Sochi where Grabar-Kitarovic burst onto the World Cup scene and inadvertently became a meme star at Croatia’s quarter-final match against hosts Russia.

Looking glamorous in a Croatia jersey tucked into garish red trousers, the 50-year-old cut a stylish figure in the VIP box at Fisht Stadium, as she stood and waved to the crowd and double-fist-pumped at every Croatia chance as the team eventually ousted the hosts 4-3 on penalties after 120 minutes of football failed to separate the two sides at 2-2.

Cutting a slightly more reserved figure and sitting just two seats away was Russian Prime Minister Dmitry Medvedev, with whom the president shook hands, creating a chasm in charisma to say the least.

Presenting Putin with a personalized shirt...and getting flowers in return

Having got acquainted with the prime minister - and leaving him rather unimpressed-looking - Grabar-Kitarovic went about making amends with Russian President Vladimir Putin.

As far as gift thoughts go, the Croatian president has got it covered, and when she handed over a personalized 'Putin 9' football shirt during their meeting in the Kremlin it was a perfect example of that.

“This is for today’s match,” Grabar-Kitarovic said as she handed over the red-and-white checkered jersey. Perhaps unsurprisingly, Putin did not return the football-themed present-giving, handing over his traditional bouquet of flowers in return.

Saying 'We will win the World Cup at a NATO summit

If fans love anything, it's a little bit of confidence from officials, and Grabar-Kitarović's prediction at a NATO summit was the perfect show of belief in her country's players.

The Croatian president admitted she and other top dogs at the summit in Brussels, Belgium, had not watched, but had "followed" the Croatia versus England game at dinner. She was even photographed at the summit wearing a red and white neckerchief as she posed with US President Donald Trump.

“We followed the game over dinner,” Grabar-Kitarovic said as she entered the last sessions of the meeting. "It was wonderful because all the allies were cheering for all of us, mostly,” she added, before giving her forecast: “This will be a successful summit and we will win on Sunday."

Although her prediction wasn't exactly spot on in the end, her optimism and confidence was enough to win the respect of football fans worldwide.

Getting soaked to console Luka Modric

When the heavens above Luzhniki Stadium opened after the final and the rain hammered down onto the pitch, Grabar-Kitarovic stood firm as the rain soaked her Croatian jersey and congratulated each player and member of the Croatia staff, from coach Zlatko Dalic and his technical assistants to the fringe squad players

Croatian captain Luka Modric, already with the weight of disappointment in the shape of his runners-up medal hanging around his neck, stepped up to collect his Golden Ball award for the best player at the World Cup, yet another consolation prize.

The president saved her defining moment until last, as she wrapped her hands around the skipper's face and cried tears of pride as she consoled and thanked the mercurial midfielder. Heart-melting level: 100.

Even in defeat the president managed to extract a collective sigh of admiration from the world's watching football supporters, when she dismissed the obvious pain of losing a World Cup final to proclaim that Croatia was on top of the world in any case.

'Gold or Silver, we're on top of the world' - Croatian president on #WorldCup final in #Moscow #Croatia🇭🇷 #Russia🇷🇺

“It doesn’t really matter if we win the gold or the silver. We’re on top of the world. And I’m so proud of my nation,” Grabar-Kitarovic told RT in the wake of the defeat to France.

Whatever the result of the World Cup final, one outcome of the tournament was clear for all to see: Grabar-Kitarovic's blend of cheerful chic, boundless energy and patriotism ensured she won first place in the hearts of football fans worldwide.