‘We will win the World Cup!’: Croatia president with final promise at NATO summit (VIDEO) 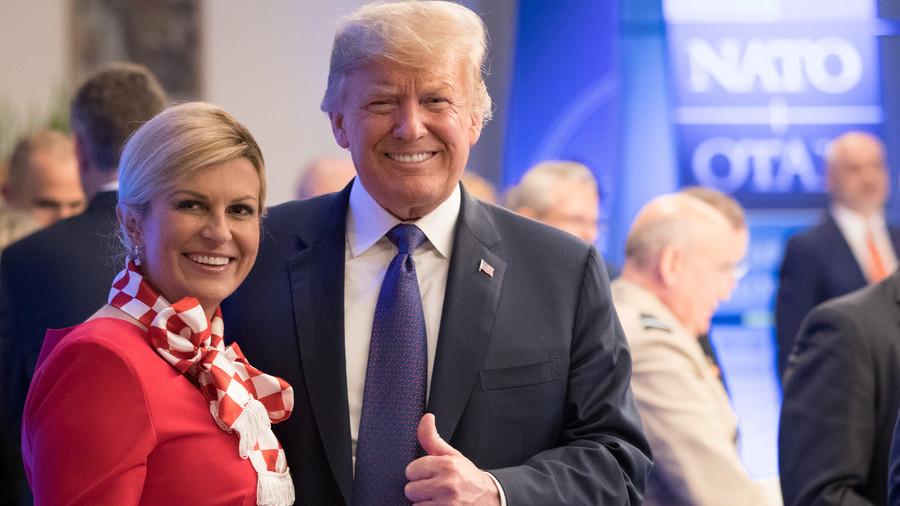 Patriotic Croatia president Kolinda Grabar-Kitarovic confidently predicted at the NATO summit that her country will lift the World Cup trophy at the 2018 final in Moscow on Sunday.

Croatia reached world football’s premier match with a 2-1 extra time win over England at Luzhniki Stadium on Wednesday to set up a final showdown with France at the same stadium on Sunday.

“We followed the game over dinner,” Grabar-Kitarovic said as she entered the last sessions of the NATO summit in Brussels, Belgium, on Thursday, AP reported.

“It was wonderful because all the allies were cheering for all of us, mostly,” she added, before giving her forecast: “This will be a successful summit and we will win on Sunday."

Grabar-Kitarovic, who sat at the table together with French President Emmanuel Macron and was photographed at the event with US president Donald Trump, has every right to feel assured of success.

Croatia captain Luka Modric and his men overcame a 1-0 scoreline provided by an early Kieran Trippier free kick with a second half equalizer from Ivan Perisic and a 109th minute winner from striker Mario Mandzukic.

President Grabar-Kitarovic previously made headlines when she was snapped in the stands at Fisht Stadium in Sochi wearing a Croatia national team jersey at the match versus hosts Russia on Sunday.

Although Russia's prime minister Dmitry Medvedev looked less than impressed in the same VIP box, the Balkan nation prevailed by a 4-3 penalty scoreline after the match ended 2-2 in normal time.

France reached the match by virtue of a 1-0 win over Belgium in St. Petersburg, cementing their third final in 20 years since winning the trophy at their home World Cup in 1998.