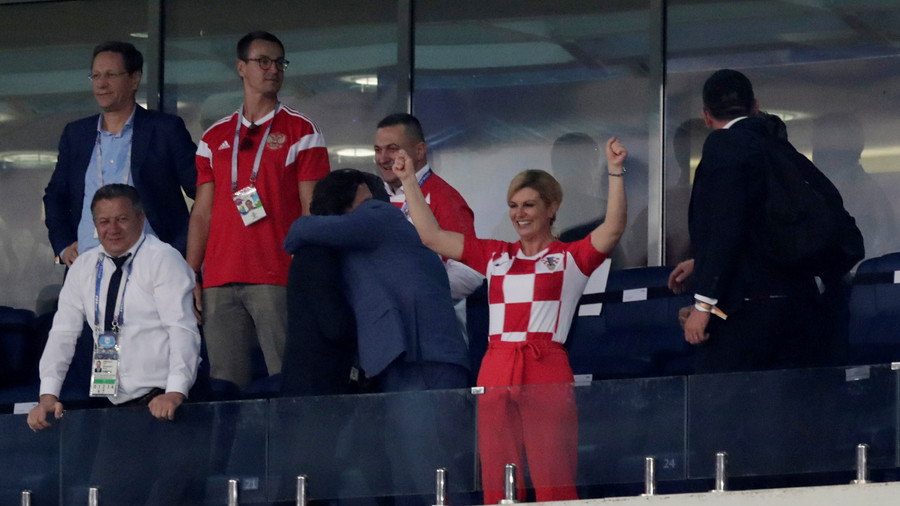 Croatian president Kolinda Grabar-Kitarovic became a meme star when she traveled economy to watch her team play, but her fame was sealed when she wore her team's shirt to sit among the suits for her countrymen's win over Russia.

On Saturday night in Sochi, Grabar-Kitarovic's red-and-white check shirt was initially concealed beneath a piercing red pantsuit, and the opening exchange of goals as celebrated by handshakes with Russia's prime minister Dmitry Medvedev, who was sitting one place away, with FIFA head Gianni Infantino between them.

This is the lady who inspired Croatia tonight. She was present. She shouted horse. She screamed. She jumped. She shook Dimitr's hand. Yes, she is more than a mother to the Croats. Hail Kolinda Grabar-Kitarović. pic.twitter.com/H4QeNvh5z7

But as Croatia broke the stalemate in extra time, all etiquette was out in Sochi, and the now-jacketless Croatian politician bounced up and down next to Medvedev, who looked away, disappointment etched on his face.

Medvedev got his revenge when Russia equalized minutes later, but it was Grabar-Kitarovic whose celebrations will be best remembered, as Croatia, a country of 4 million, sealed its place among the top four in the world with a penalty shootout win.