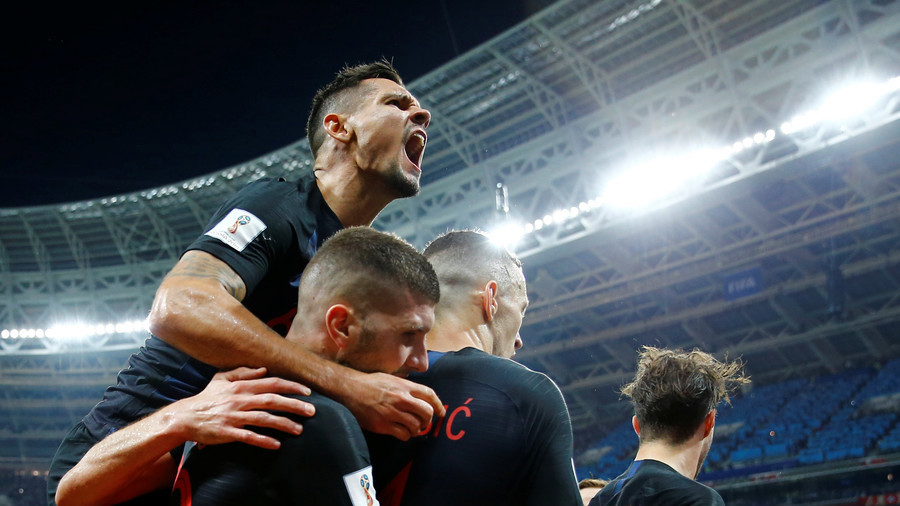 Croatia sensationally cemented their first-ever World Cup final with a dramatic 2-1 extra time win over a gallant England side at Luzhniki Stadium in the Russian capital on Wednesday.

A match that became a long battle between two teams displaying warrior spirit began with a Kieran Trippier free-kick within the first five minutes. That goal was cancelled out by a second half Ivan Perisic equalizer to ensure the sides were tied at 1-1 after 90 minutes.

In the end a goal from striker Mario Mandzukic in the second half of extra time provided the agonizing difference that booked Croatia a first-ever World Cup final place, in which they will meet a formidable-looking ‘Les Bleus’ at the same stadium on Sunday.

Given the weight of the game, which would bring a first ever final for Croatia and a first final in over 50 years for England should they win, there would be some expected early nerves for either side in the Russian capital.

England, however, who have been praised for their youthful side showing little to no fear during the biggest football showpiece on earth, showed no such early worries and attacked from the off.

After just a few minutes, Jesse Lingard showed immense flair in pirouetting over the ball before passing to Dele Alli, who was bundled over by Croatia captain Luka Modric around 20 yards out. Turkish referee Cuneyt Cakir had no doubts in ordering a free-kick.

Up stepped a Kieran Trippier, so confident and steady he had been in all England’s games up until that point. That sureness never wavered and the 27-year-old curled beautifully into the top right-hand corner to leave Danijel Subasic, whom many have singled out as the best goalkeeper in the tournament so far, no chance although the Croatian stopper was at full stretch.

The goal was England’s 12th at the World Cup – more than by any other England side at a major tournament. First blood to the Three Lions.

The set piece goal may have come as a shock to most, as it did not involve the head of Harry Maguire or John Stones, and nor was it a penalty. But minutes later and Maguire, England’s center back of the moment, got his head to two corners in quick succession, first from Ashley Young from the left and then Tipper from the right to restore some normality.

Dejan Lovren showed frustration when he brought down Kane near the center circle. Moments later a weak Subasic clearance dropped to Raheem Sterling who played through captain Harry Kane, but he was well offside. The flag went up but the England skipper dragged his effort wide anyway.

Croatia did have their moments, and at the other end that innocuous wizard Luka Modric tried a run down the right flank, but his ball in cannoned out to Ante Rebic, whose powerful left-foot strike was gathered easily by Jordan Pickford.

England, however, would not be contained and Dele Alli laid the ball off to Jesse Lingard, whose placed right-footed shot went well wide. The Croatians did find their groove in parts in the first half, but they were few and far between. A poor Pickford clearance was forwarded to Rakitic, who showed glorious balance and poise to bring the ball under control, but Kyle Walker stood strong to nick the ball from the Barcelona man.

Moments later Walker was on hand to head away a free-kick, but the ball found its way to skipper Modric. Cue midfielder Jordan Henderson to step in and ease the Real Madrid playmaker off the ball. Although Croatia had a touch more of the ball in the first half with 52 percent of possession, it seemed England had contained their opponent’s two most influential players going into the break.

After the restart and the song ‘England’s going to win’ could be heard continuously from England’s traveling band. Forward Mario Mandzukic was the first to receive a yellow card, then Kyle Walker was booked for a mini fracas with Rebic shortly after he cleared when Croatia broke through four against four, the danger eventually petered out.

England continued to attack down the flanks; Trippier volleyed across the box to Kane for him to dive in, but the ball was cleared. In defense, when England broke down Croatia attacks, they were quick to cleverly play the ball forward giving them time to regroup and take pressure off the defense, Jordan Henderson doing well in the center of the park to keep control of possession.

One England player unusually the target of criticism often is Raheem Sterling. The forward went down in the Croatia area but arose to try and poke the ball across goal, but no penalty was appealed for or given.

Modric broke down the right but his ball into the area was cleared only as far as Ivan Perisic who shot from around 14 yards. Pickford was quick to dive but the ball was blocked, and then cleared out. Panic for England averted.

The old football cliche ‘getting a goal from nothing’ reared its head. A ball in from the right flank by Sime Vrsaljko had Kyle Walker stooping to head to safety, but an onrushing Ivan Perisic arrived at the back to poke the ball home with a high left boot to net his second in six World Cup games and with it make it all square again.

After the goal, England began with much more urgency and formulated clever attacks from the back. A combination of passes from Henderson and then Sterling set Lingard free but the through ball was over-hit and Subasic collected.

Croatia on the other hand sensed blood. Perisic made space for the shot form wide on the left-hand side of the area which agonizingly hit the far post and the rebound found its way into Pickford’s hands. Moments later and Alli and Young’s attempts to play the ball out lost possession, a Croatian corner was cleared but found its way to Rakitic, who powered well over.

England did have their chances, Raheem Sterling pushed forward but his low ball whipped in across the box flashed across the goal. At the back, their normally formidable defensive line showed signs of tiredness which led to Pickford being exposed more than he would have liked, but the England keeper still remained confident.

A Kieran Trippier free-kick from just in the final third on the right flank was headed down and into the ground by Harry Kane, but was well wide. That was the last action of the 90, and extra time beckoned for the second time for England and the third successive time for Croatia at the tournament.

The match was destined to be a survival of the fittest, which precipitated changes. One of those was substitute Danny Rose, who brilliantly created space to lay off to fellow sub Eric Dier to shoot but his effort went well over. From the resulting corner, John Stones’ header was agonizingly cleared off the line by Vrsaljko. Football matches are decided on small margins, and England were seeing none fall their way.

Rashford then cynically brought down the full back on the right flank to give Croatia a free-kick in a dangerous area, although the attack was dealt with conformably.

At end of first half of extra time Perisic was set free on the left, his ball in found Kramaric but his shot was cleared before English hearts were in mouths when Mandzukic was set free in the area, but his touch goalwards deflected off Pickford at full stretch, although the ensuing and unavoidable collision forced the striker to stay down for treatment.

The Croatia number 17 recovered in time to make his next effort count, latching onto a flick-on header from Perisic in the second half of extra time, which was guided straight into his path as the defense seemed to be caught ball-watching. The Juventus man snuck behind the backline and made no mistake in tucking the ball away past Pickford to make the score 2-1 Croatia with 109 minutes played.

England did continue to push forward, but their frustration boiled over in extra time added time when Dele Alli had a coming together with Rakitic. Marcus Rashford’s free-kick provided the last glimmer of hope for England, but when the ball was cleared the referee’s whistle soon followed and the fate of both sides was sealed.

Croatia, who have not won one of their three knockout matches in normal time, for the third time came from behind to win and book their place in the final of the tournament. For England, football is not coming home, but their fearless young side made sure a part of it was briefly returned to their nation.