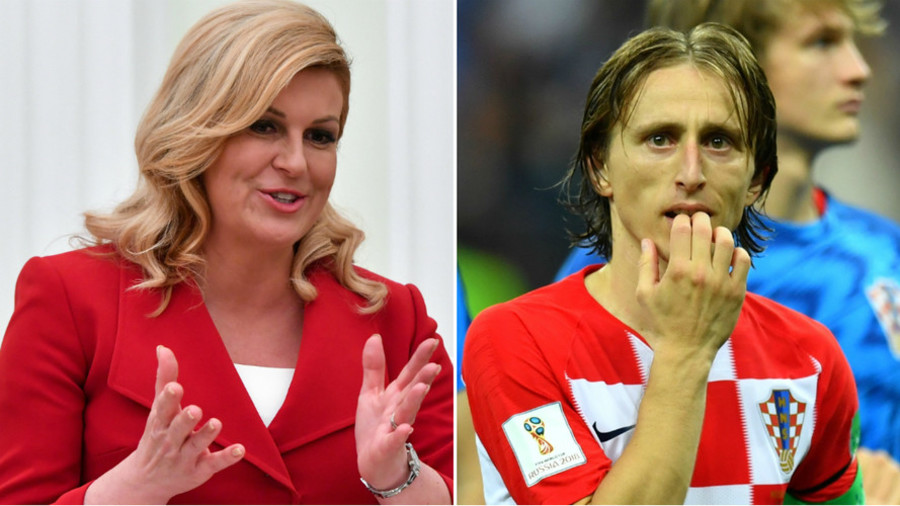 Croatian President Kolinda Grabar-Kitarovic cemented her status as a World Cup superstar by receiving 25 percent more attention than any Croatia player despite record online interest in the country at the final.

The tiny Balkan nation’s unlikely march to the final saw general online interest in Croatia soar, beginning after their dramatic quarter-final penalty shootout win over hosts Russia in Sochi, which saw a 30 percent rise in worldwide online mentions according to Croatian aggregator Mediatoolkit, more than all mentions combined before that match.

Proud of our national football team that played brilliantly in the #WorldCupFinal They have secured more positive media coverage for #Croatia than ever in the history our small, proud country! pic.twitter.com/sYTi4tkj2W

However, the focus of that bubbling interest was not centered on the mercurial midfield pairing of Luka Modric and Ivan Rakitic, nor the goals of Mario Mandzukic, not even the choice songs spouted by defender Domagoj Vida.

That match just so happened to announce President Grabar-Kitarovic’s stylish and talismanic presence supporting from the stands to the world stage, as she wildly backed her team from the Fisht Olympic Stadium VIP box in the famous red-and-white chequered jersey and garish red pants.

Her cheers for the team were bellowed out regardless of Russian Prime Minister Dmitry Medvedev cutting a more morose figure as his band of heroes bowed out 4-3 on penalties after an exhilarating 120 minutes of football which had ended 2-2.

According to figures published by the company, which boasts round-the-clock mention monitoring for over 100 million online sources, of the 30 percent rise in online mentions after the semi-finals, over 80 percent of the related news was positive.

Although Croatian players grabbed headlines for their on-pitch heroics and their off-pitch antics, from goalkeeper Danijel Subasic’s back-to-back shootout saves to defender Vida and Croatian assistant coach Ognjen Vukojevic facing FIFA punishment for singing ‘Glory to Ukraine’ after the Russia win, it was Grabar-Kitarovic who grabbed the most mentions.

Of the record-high 258,326 mentions about Croatia during Sunday's final showpiece, Grabar-Kitarovic had a whole 25 percent more than skipper Modric, to whom she presented the Golden Ball for the tournament’s best player after the final defeat.

Even the president’s teary-eyed congratulations to the skipper tugged at hearts, and although they were mere drops in the torrential downpour at Luzhniki Stadium in Moscow at the final ceremony, they caused yet another seismic wave of interest online.

Many spectators were touched by the president’s personal words to the Croatia number 10 even while being soaked by the heavy rain and without the protection of an umbrella, all done while wearing a replica team shirt. The final is where Croatia made their stage exit from the World Cup, but the glamor of Grabar-Kitarovic had proved more than a match for the guile of the players on the field.