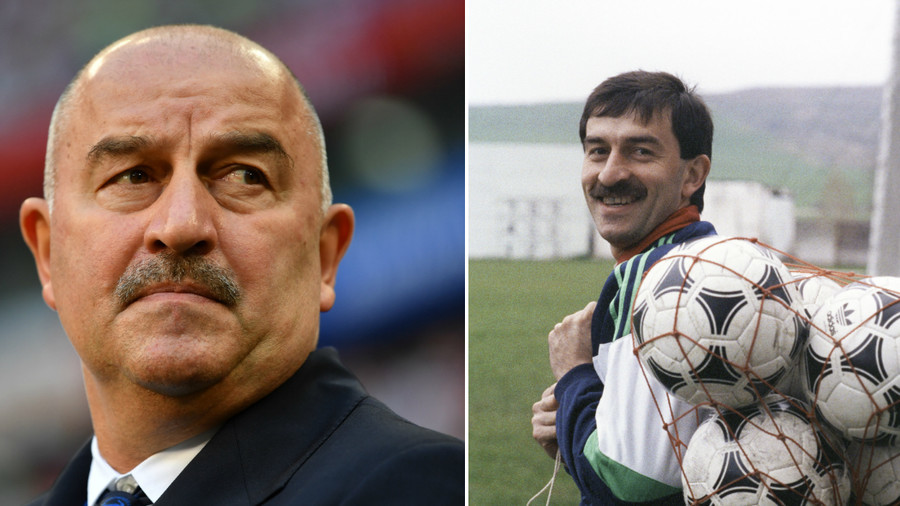 As Russian players and staff sprinted off to congratulate goalkeeper Igor Akinfeev after his penalty shootout heroics sent Russia into the World Cup quarter-finals, one man stood on the sidelines, implacably calm.

Russia coach Stanislav Cherchesov remained with his arms aloft in celebration, but was almost expressionless as the chaotic celebrations unfolded around him at a raucous Luzhniki Stadium.

Russia’s 4-3 penalty shootout win against Spain on Sunday sent a nation into dizzying celebrations, but it also provided personal vindication for Cherchesov – the mastermind of the hosts’ unlikely World Cup run.

That Russia have come so far - largely against the odds - owes much to Cherchesov, but just weeks ago he was one of the most-criticized figures in the country.

So how has Cherchesov gone from zero to hero for Russia?

Cherchesov, 54, took over the team after the debacle of Euro 2016. The former international 'keeper was seen as a safe pair of hands, a familiar face from the domestic scene who could dig the team out of its rut and guide it into its home World Cup.

Born in the North Ossetia region in the Caucasus, Cherchesov started his 20-year playing career at Spartak Vladikavkaz in the early 1980s. He soon moved on to Moscow, where he played at Spartak and Lokomotiv, before spells at Dynamo Dresden in Germany and Tirol Innsbruck in Austria.

He won more than 40 caps for the Soviet/Russian national team in a career of remarkable longevity which saw him appear in the famous 6-1 win against Cameroon at the USA '94 World Cup - in which Oleg Salenko scored five times - as well as being called up for the squad for Japan and South Korea in 2002 at the age of 38.

His management career was naturally forged from the traits and experiences he gained as a player. Starting out in the Austrian lower leagues, he then moved to Russia to take roles at Spartak and Dynamo Moscow, among others, before heading to Legia Warsaw, whom he guided to the Polish league title in the 2015/16 season.

That latter success helped secure him the job with the national team in the wake of the disastrous Euro 2014 campaign which saw the team pick up just one point from three games.

Cherchesov was seen as a steady hand who could withstand the high-pressure role of guiding the team into its home World Cup.

After a mixed opening spell which included a creditable draw with Belgium but defeats to the likes of Costa Rica and Qatar, Russia headed into last summer's Confederations Cup - a key rehearsal for the main event this year.

They exited at the group stage after beating New Zealand but losing to Portugal and Mexico, and despite a subsequent 3-3 friendly draw with Spain, the signs of crisis were brewing.

Cherchesov largely took the flak for what appeared to be a looming World Cup disaster set to be played out in front of the eyes of the world.

The teams’ tactics appeared uncertain. Cherchesov frequently switched between three and four at the back, and seemed equally unsure over his preferred starting 11, or even anything close to it.

Russia also suffered injury setbacks, with the two first-choice centre-backs, Georgy Dzhkiya and Viktor Vasin, both being ruled out of the World Cup through serious knee ligament injuries.

Meanwhile, Cherchesov was seen as demonstrating a stubborn streak over his unwillingess to recall midfielder Igor Denisov into the set-up, essentially over a feud dating back to the pair's days at Dynamo Moscow.

The man with the mustache was becoming increasingly mocked and maligned, his aging nightclub bouncer-type appearance and his apparent lack of tactical nous earning derision in the national press.

The criticism reached a crescendo heading into the World Cup, as Russia went seven games without a win, putting in particularly insipid displays in their final warm-up games against Turkey and Austria, and dropping to 70th in the FIFA rankings.

Some even pondered: Was it too late to parachute someone else in to lead the team at the World Cup?

But Cherchesov remained unshakeable in his confidence in his ability and his team's, withstanding the press barrage and insults with grace, an eternal optimist convinced that everything would come right for the hosts.

Crucially, he made a number of decisions immediately before the World Cup that were questioned at the time but have since paid dividends.

Steadfast on keeping Denisov out of the team, Cherchesov did relent over another player who had seemed persona non grata - striker Artem Dzyuba.

Relations were strained between the pair after differences in the run-up to last summer’s Confederations Cup. Dzyuba had left the squad ostensibly due to injury, but there were rumblings of discontent with the coach, especially after the forward was pictured apparently mocking Cherchesov’s familiar moustache.

But once Dzyuba found himself out of favor at club team Zenit St. Petersburg and on loan at Arsenal Tula in the provinces, he knuckled down, got among the goals and forced his way into Cherchesov’s plans.

That Cherchesov showed a willingness to build bridges with Dzyuba was a shrewd move; the striker has been a key player for Russia at the World Cup, scoring in the opening two games against Saudi Arabia and Egypt, and converting the crucial equalizing penalty against Spain on Sunday.

Likewise, Cherchesov’s solution to the center-back crisis has also proven successful. Veteran defender Sergei Ignashevich, 38, was recalled from international retirement in a move that many believed smacked of desperation.

But Ignashevich has been a steady force at the back, an experienced guiding hand alongside partner Ilya Kutepov, 24.

While Ignashevich scored a bizarre own goal against Spain, his cool penalty in the shootout demonstrated the calmness under pressure that is also reflected in his manager.

Other factors are definitely not down to chance. It was noted that Russia emerged from the group stage with some of the highest stats for distances covered.

That can partly be explained by Cherchesov’s insistence on an intense two-week training camp in Austria ahead of the World Cup that left Russia looking leggy in their warm-up games, but which has brought results when it has mattered.

Likewise, Cherchesov has shown tactical nous and flexibility during the tournament.

What reeked of uncertainty over his preferred formation has beneftted Russia in their four games so far. They started with a back four in the opening two games, allowing more attacking intent that paid dividends against Saudi Arabia and Egypt, with those games bringing eight goals.

But knowing that Russia were unable to match pass masters Spain in the last 16, Cherchesov reverted to a back five and midfield four, forming a defensive block that put safety first before the team gave any notion to attack.

The fact that Russia had been drilled in both systems paid off, as Russia frustrated Spain for large periods in Moscow despite the Spaniards having 75 percent of possession and making fully 800 passes more than Russia.

It was “parking the bus,” but it gave Russia their best possible vehicle to the quarter-finals.

After the game against Spain, Cherchesov remained characteristically calm and collected when asked to describe his emotions, saying: “My emotions were plain and simple during the game. My emotions are to manage the team. The game has ended, everything is done and dusted. We now think about the next game. They are such simple emotions.”

“Plain and simple” – words which many would use to sum up Cherchesov and his straightforward approach to the game, but one which prevailed in the face of Spain’s relentless tiki-taka.

Russians head into the quarter-final against Croatia in Sochi dreaming of how far their team can go at the World Cup - something unimaginable just weeks ago.

But the fact that Cherchesov looked the least surprised person in the stadium after Russia’s historic win against Spain should not come as a shock. After all, he knew all along everything would turn out all right.