‘It’s done. We now think about the next game’: Russia coach Cherchesov cool after historic win 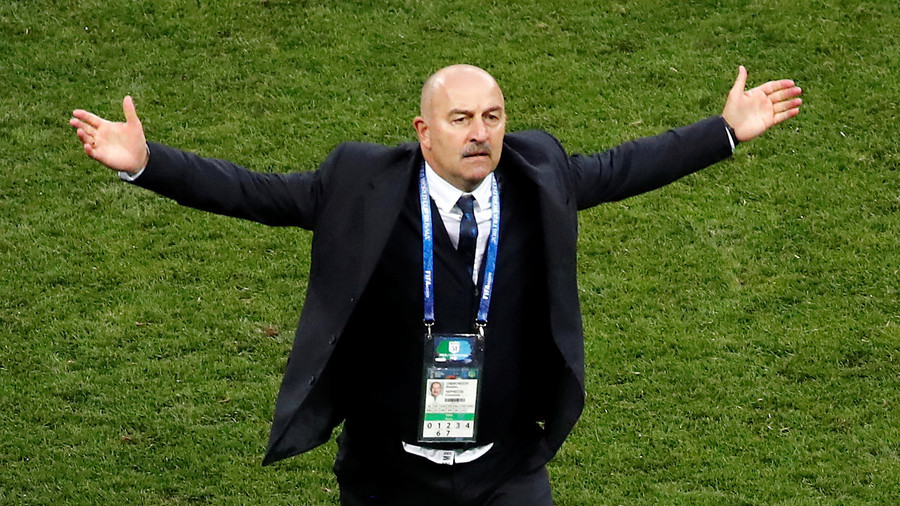 Russia manager Stanislav Cherchesov has remained calm and collected after his side’s heroic 4-3 penalty shootout win over Spain to book a quarter-final place in their home World Cup, saying his emotions remain "plain and simple."

The victory means Cherchesov is the first coach to ever lead a Russia side to the last eight stage of a World Cup, doing so against the odds against 2010 winners Spain in front of their home fans at Luzhniki Stadium in Moscow.

Answering a question from RT Sport in the press conference after the game on his emotions following such an historic win, Russia manager Cherchesov said he is concentrating only on the next game, despite the gravity of the result.

“My emotions were plain and simple during the game. My emotions are to manage the team. The game has has ended, everything is done and dusted. We now think about the next game. They are such simple emotions,” Cherchesov laconically replied.

With the win, Russia booked a quarter-final date with either Croatia or Denmark in Sochi on July 7, after dispatching one of the pre-tournament favorites in a sapping but pulsating match in the Russian capital. Cherchesov's team must now surely fancy their chances against all-comers in the next round.

Spain could not find a way past a solid Russian back line after taking the lead through a Sergei Ignashevich own goal on 12 minutes from a free-kick, an error perhaps forced by Spain captain Sergio Ramos, who tussled with the defender in the area as the set piece was delivered.

Artem Dzyuba then won a penalty when he rose to meet a corner at the other end, his header being blocked by the arm of Spain defender Gerard Pique.

Dutch referee Bjorn Kuipers pointed to the spot and showed Pique a yellow card, before Dzyuba stepped up to fire in an equalizer just four minutes before half time.

That's the way the match stayed after 120 minutes of football, leaving penalties to decide the outcome. In the end, veteran goalkeeper Igor Akinfeev denied Koke and Iago Aspas to clinch the match 4-3 on penalties for the hosts.