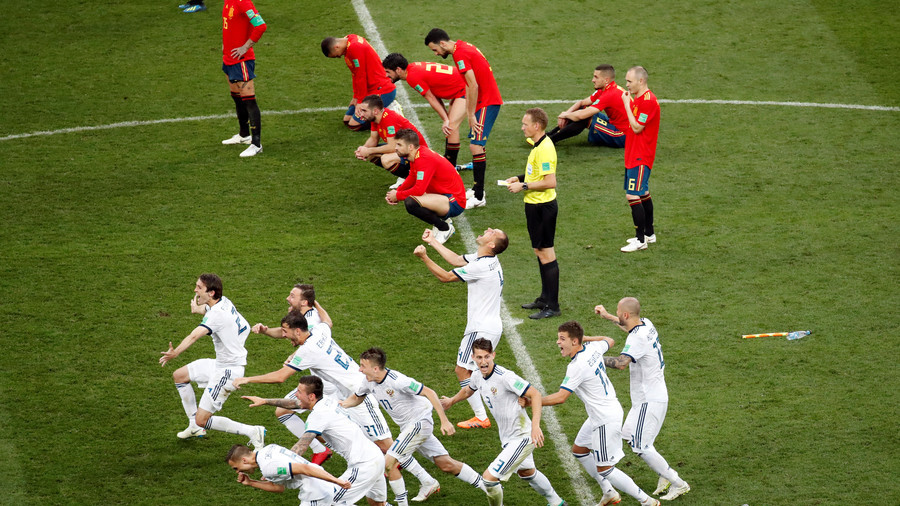 Russia pulled off a spectacular and improbable victory to stun Spain after extra time and penalties at Luzhniki Stadium to keep their home World Cup hopes alive and send one of the pre-tournament favorites packing.

In the end, it was a dramatic 4-3 penalty shootout that decided the game, after a Sergei Ignashevich own goal and Artem Dzyuba penalty in normal time meant the two sides could not be separated after 120 minutes of football. With the result, Russia booked a quarter-final date in Sochi on July 7 against either Croatia or Denmark in the day’s other last 16 tie.

Much of the talk before the game was about the importance of Russia’s ‘12th man’ in their raucous Luzhniki Stadium supporters. The sound of the national anthem bellowing from the 78,000 supporters in the stands ensured that man was the first to make itself counted.

When the action got underway, Spain showed some of the football they are famous for, although their ‘tiki taka’ passing tactics were receive with boos from the crowd. Spain captain and talisman Sergio Ramos is perhaps the most vilified and sometimes reviled man in football, but every play and attack was built from the Spanish captain in defense.

One of those attacks resulted in Yuri Zhirkov bringing down Nacho on the right flank. The resulting free-kick found a dueling Ramos and veteran Russian counterpart Sergei Ignashevich. As the two tussled and tumbled to the floor, the ball came off the heel of Ignashevich and curled into the net past a rooted Akinfeev.

After the goal, Russia did have their moments, from a set piece and balls into the area for Dzyuba to nod down, whose 6ft 4in frame is always going to cause panic for opposition defenders.

Golovin went close with 10 minutes of the first half remaining, beginning the attack for Dzyuba to head down. The ball found its way to Zobnin, who brought it forward and laid it off for Golovin to curl a shot on his weaker right foot just past the far post of David De Gea’s goal.

Russia did get their breakthrough when one of their attacks forward resulted in a corner. A Dzyuba header hit the arm of Pique, Dutch referee Bjorn Kuipers belatedly pointed to the spot without confronting VAR and booked the Spain defender.

Dzyuba the stepped up to fire the ball into the right hand side and send De Gea the wrong way to net his third in four World Cup games. The 12th man reacted with seismic cheers; the nation was level again and it was now all to play for in the Russian capital.

Golovin battling hard in midfield, Russia still with their tactics of long ball up to Dzyuba.

Diego Costa laid off to Isco, who went desperately close in an effort that was sure to have the collective heart in the mouths of every Russian fan inside the stadium.

Russia’s tactics changed when Fedor Smolov, the forgotten golden boy of Russian football, came on to replace Dzyuba, who stopped and said a few words to Cherchesov, neither of the two men looked too pleased and have a difficult history together.

Russia continued to press, and had a half-hearted penalty appeal when Golovin went down under a challenge of Ramos. Kuipers gave nothing as replays showed Ramos simply got himself in-between the onrushing midfielder and the ball.

For the Spaniards, the introduction of iconic midfielder Andres Iniesta meant that Spain reverted to their more famously fluid football, formulating attacks with a string of passes, but none could find their way through up until the 80th minute.

In the final 10 minutes, Iniesta uncharacteristically miskicked from a corner but Russia managed to get it away, Koke’s dangerous ball into the area moments later was headed away by Mario Fernandes.

With a little over five minutes of normal time left, Iniesta made his first meaningful contribution to the game when he brought a save low down to Akinfeev’s right from 20 yards, the ball cannoned out to Aspas, but his effort was turned away with cat-like reflexes by the veteran stopper.

A hat-trick of corners in the final couple of minutes all resulted in nothing, the final of those seeing Ramos head over. Fernandes headed the ball clear from yet another Spain ball into the area with the last real attack of the 90 minutes and with that extra time was needed to separate the two sides.

The first half of extra time saw the action go much the way of the last 20 minutes of normal time, with Russia hemmed in under wave after wave of Spanish attack. Marco Asensio forced a save from Akinfeev from 20 yards, Ignashevich also showed enough defensive nous to keep a livewire Aspas at bay.

Aleksandr Golovin gave away a free-kick, replays showed he won the ball cleanly, but the free-kick only brought a tame goalward header from Gerard Pique that was comfortably caught by Akinfeev, the last action of the first half of extra time.

Tired legs traipsed off the pitch but Spain looked spritely as they began the second half, but they could still find no way past the Russia defense. Hearts reached mouths again when substitute Rodrigo wrong-footed substitute Vladimir Granat and powered into the area with a strong run, his cross-shot was equalled by Akinfeev and Dani Carvajal’s follow-up was blocked, the Russian defense proving water-tight once again.

Ignashevich gave away a silly foul halfway up his own half, the resulting inswinging free kick found its way past every player in the area but when Pique went down under a challenge from Ignashevich, the entire Spanish bench flew up and protested. Although it was enough to bring a VAR consultation no penalty was eventually given as there was no clear foul.

Russia won a corner, Golovin to take it but when the ball broke clear from a wayward header, Smolov could do nothing. The two sides battles out the remaining minutes of the match at Luzhniki as the rain fell on Russia’s sporting epicenter. A Rodrigo shot saved by Akinfeev restored some hope and as the last attack of the 120 minutes. Penalties ensued.

Ramos won the toss and elected to shoot towards the goal behind which Spanish fans had gathered, much to their delight at that end. Iniesta was first to take and score, sending Akinfeev the wrong way. An unsure Smolov alleviated fears by smashing cooly past De Gea. Pique stepped up and rifled in off the post, Ignashevich made a stuttering run-up and showed no nerves as he slotted in to make it 2-2.

Then the real drama came as Koke had his shot blocked by Akinfeev, straight at the keeper diving to his right. Golovin shot home to have Russia take the lead 3-2 on penalties, almost firing through De Gea in the goal.

Ramos, so often the villain, was the hero from the spot, calmly slotting away to level up again. Cheryshev netted his spot kick to make it four from four straight down the center of the goal. Aspas then missed his spot kick to send a rapturous Russia into the next round and keep the home dream alive.