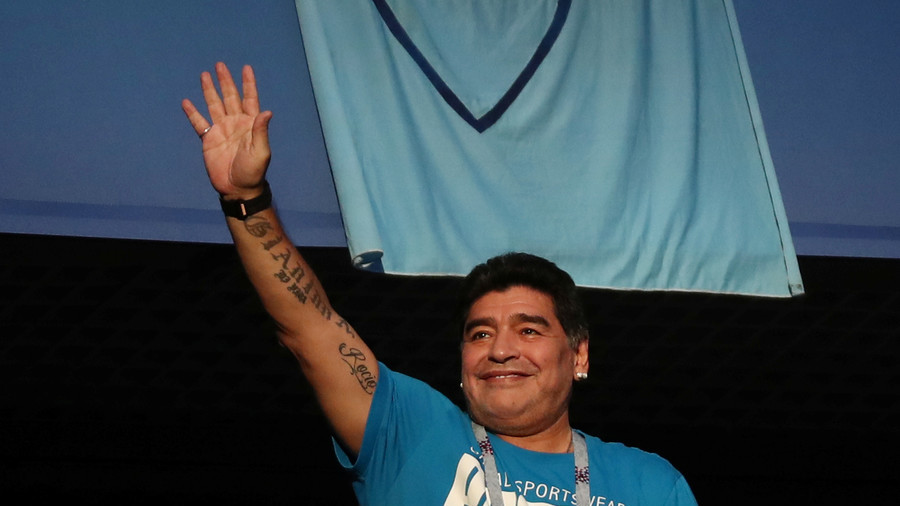 Diego Maradona has reassured fans that he "is fine” after receiving medical treatment during Argentina’s helter-skelter World Cup victory over Nigeria in St. Petersburg on Tuesday.

At the final whistle, Maradona was seen being helped into a VIP box at the stadium and then eased into a chair, unable to walk unaided.

It followed a dramatic game as Argentina booked their place in the last 16 thanks to goals from Lionel Messi and Marcos Rojo, with World Cup winner Maradona appearing an animated figure in the stands throughout the match.

Maradona, 57, later posted a picture on his Instagram account with text in Spanish, Italian and English, reassuring fans that he was “fine” and had merely suffered a bad neck and low blood pressure, and that contrary to reports he had not been taken to hospital.

“I want to tell everyone that I am fine, that I am not, neither was I interned.

“In the halftime of the game against Nigeria, my neck hurt a lot and I suffered a decompensation. I was checked by a doctor and he recommended me to go home before the second half, but I wanted to stay because we were risking it all.

“How could I leave? I send a kiss to everyone, thanks for the support!”

Maradona was seen going through a full range of emotions during a thrilling World Cup encounter in which Argentina had given their qualifying hopes a boost though Messi's early goal, only to surrender it through a Victor Moses penalty, before snatching the win late on.

When Lionel Messi opened the scoring for Argentina on 14 minutes, Maradona was seen placing his arms across his chest and staring skywards, wide-eyed, prompting some to describe him as appearing “possessed.”

The former Argentina captain then seemed to succumb to fatigue as he was seen slumped in his seat with eyes closed, before bursting back to life when Rojo scored the dramatic late winner, hanging over the glass front to the VIP box and showing two middle fingers to the fans below.

Argentina’s World Cup hopes had appeared dead and buried as they entered the final 10 minutes of their Group D match with the scores level at 1-1, a result which would have seen Nigeria progress along with Croatia.

However, Rojo stepped up to sidefoot a volley home in the 86th minute, meaning Argentina scraped through in second spot to set up a last 16 tie against France in Kazan.