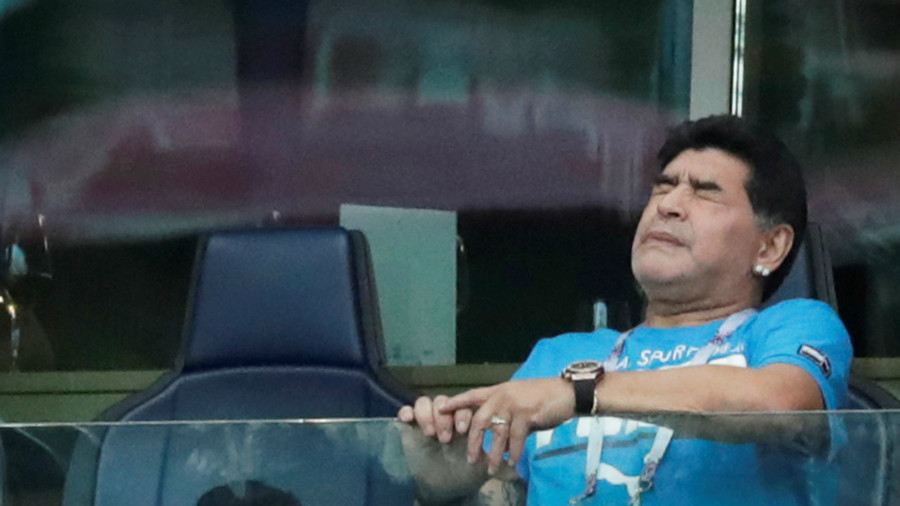 Argentina icon Diego Maradona had to be helped from his seat at St. Petersburg stadium and was reportedly treated for low blood pressure following Argentina’s win over Nigeria to seal qualification to the World Cup knockout stage.

Maradona appeared unable to walk from his seat under his own strength at the final whistle of the game at St. Petersburg Stadium, in which goals from Lionel Messi and Marcos Rojo sealed Argentina’s place in the Russia 2018 last 16.

In footage which emerged moments after the match ended, Maradona can be seen being assisted by a companion in the VIP box, where he is eased into a chair.

Maradona is so fucked he can barely walk. What a sad, sad story... pic.twitter.com/nCclEYyV7Y

While the Argentine sports broadcaster ESPN claimed Maradona had been taken to hospital, other media described the incident as a scare and said Maradona was treated for low blood pressure in the stadium and left shortly afterwards.

Diego Maradona was attended to by medics after the Nigeria v #Argentina game (via @joelcanojr ) pic.twitter.com/p6oZvTfk0j

However, according to the Argentina icon’s Instagram, the incident had occurred at halftime. “My neck hurt a lot and I suffered a decompensation. I was checked by a doctor and he recommended me to go home before the second half, but I wanted to stay because we were risking it all. How could I leave? I send a kiss to everyone, thanks for the support!” Maradona’s post reads.

Maradona appeared to exert his emotions skyward with his arms outstretched, before crossing them over his chest as if to bless himself, and then rolling his eyes into the back of his head as if possessed by an other-worldly force.

Maradona then sensationally gave a double middle finger salute to the crowd after Marcos Rojo scored a dramatic late winner to send Argentina through with just four minutes remaining.