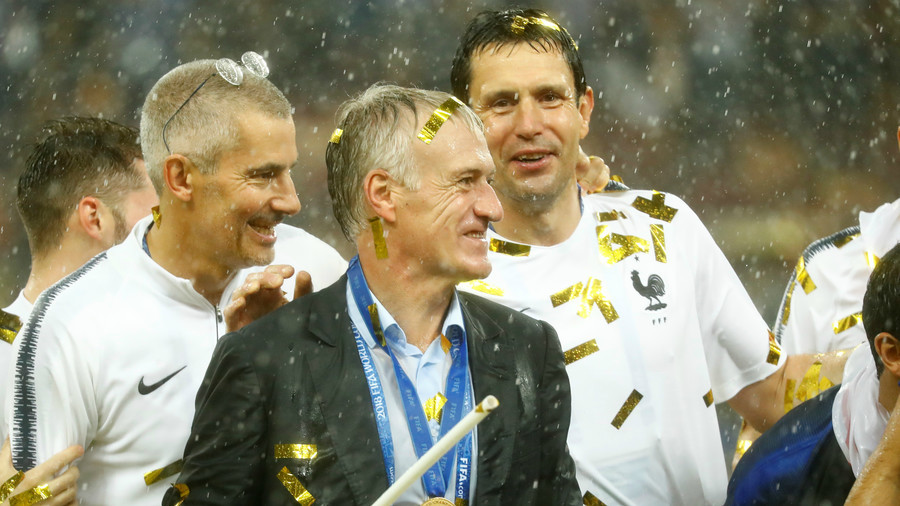 This is the moment World Cup winner France, led by goalscorer Paul Pogba, gatecrashed the post-match press conference of manager Didier Deschamps to dance on tables and spray gathered journalists with water.

France gained their second world title since their maiden win at their home World Cup in 1998 by defeating Croatia 4-2 at Luzhniki Stadium in Moscow with goals from Antoine Griezmann, Paul Pogba and Kylian Mbappe coming after a Mario Mandzukic own goal that opened the scoring.

Deschamps, who became only the third man to ever win the World Cup as a player and manager, had just entered the press conference when the players burst into the room singing his name.

The rambunctious rabble of newly-crowned world champions then proceeded to dance on tables and squirt the contents of several water bottles onto the rows of journalists in attendance and their coach.

As the players one by one made their way out of the door, Pogba, the scorer of France's third goal and the main instigator of the joyous ruckus, apologized in jest to the press.

On his way out, the 25-year-old picked up the award handed to Deschamps on France's World Cup win, and made a futile attempt at clearing away the spilled water before shouting "Vive La France! Vive La Republique!" and then swiftly making his exit.

READ MORE: ‘Tonight we party, but Ballon d'Or is not in my hands': Man of the World Cup final Griezmann

Deschamps, his coolness betraying a man who had just clinched his second world crown in the space of exactly 20 years, then joked that the players' presence had made him smell the same as before he changed for the presser, sat down and readied himself to answer questions.