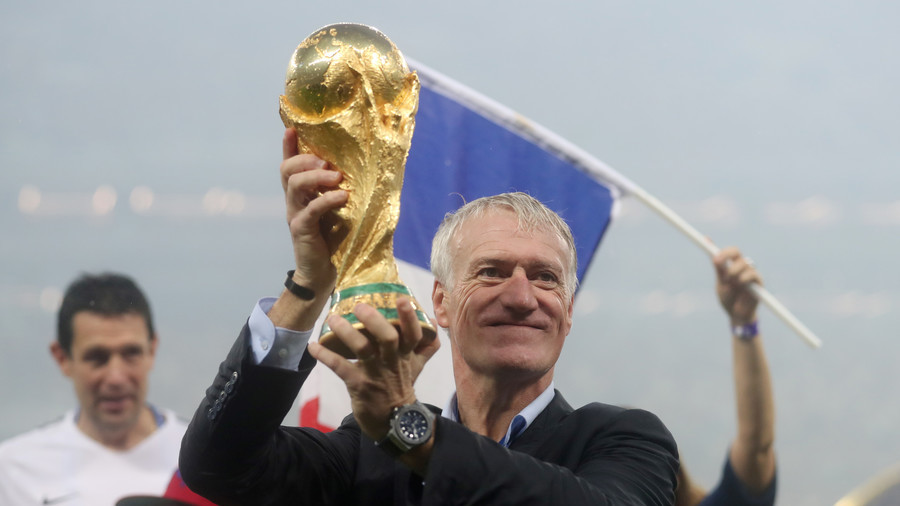 Didier Deschamps, manager of newly-crowned world champions France, has said the 2018 Russia World Cup has been unlike anything he has ever witnessed after he became only the third man to win the tournament as a player and coach.

Deschamps, who joins the elite company of Franz Beckenbauer and Mario Zagallo as those to have won the World Cup on the pitch and from the dugout, praised the tournament for its unpredictability – especially regarding the strong performances of so-called smaller nations.

Speaking at the press conference after his France side beat underdogs Croatia 4-2 inside Luzhniki Stadium in Moscow, the 49-year-old said although the lesser teams exceeded expectations at Russia 2018, France were nonetheless worthy champions.

"I have never seen and never lived through such a World Cup because there was a levelling towards the top and the small teams on paper really really well prepared and with defensive systems that of course are easy to implement but that did hurt other nations," Deschamps said.

"My memory is that great football nations had some difficulty to start but they were getting more and more powerful, this is different today. Of course the teams that had the highest level of possession, the highest level of control were punished by fast forwards because it’s football.

"That is football. If you know how to defend well you are guaranteed to have two or three opportunities to have a counter attack or a set piece and that can make the difference."

Despite admitting this World Cup was unprecedented in terms of its action on the pitch, Deschamps stopped short of affirming it was the best ever of its kind.

"I don’t know if it’s the most beautiful World Cup ever, there were goals, there were crazy scenarios sometimes but this World Cup was very very tough athletically and from the intensity point of view," the former Juventus and Marseilles midfielder said.

"You have access for all the data today, you can compare the high intensity runs, you can check the distances that have been run, but the small teams had the higher statistics compared to the teams that were supposed to be stronger on paper."

When it came to his own team, however, Deschamps was sure that his group of players, who had clinched France's second World Cup in 20 years since their first win at their home tournament at France 98, were worthy champions.

“When it comes to us, what did we do? I don’t know if we did it better. I think that in the group matches it went ok even though a lot of French journalists after our third match against Denmark were saying we were not very beautiful, but we were qualified and we had seven points and we came first in our group so it wouldn’t have been sufficient if we had carried on with the same performance level. You need to go stronger, we managed to do so.”

The France manager's press conference was momentarily interrupted at the beginning when the players, led by goalscorer Paul Pogba, gatecrashed the conference room by joyously spraying water on the journalists in attendance and dancing on tables.

When order was restored and Pogba had departed, shouting "Vive La France, Vive La Republique!" Deschamps was ready to answer questions from the press, despite complaining the players' antics had forced him to smell the same as before, despite changing his clothes six times.