‘Tonight we party, but Ballon d'Or is not in my hands': Man of the World Cup final Griezmann 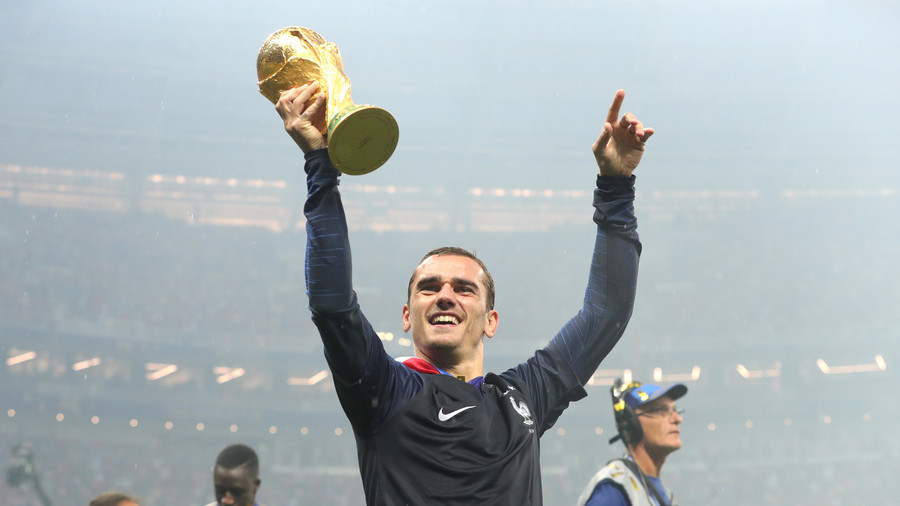 Griezmann helped France to their second World Cup win in 20 years with a 4-2 win over underdogs Croatia at Luzhniki Stadium in Moscow, providing the cross for the opening own goal and then netting a contentious penalty, on the way to being voted man of the match.

Immediately after being crowned the best team on the planet, Les Bleus’ number seven told gathered press at Luzhniki that the weight of what the team had achieved just moments earlier had not yet sunk in.

“Well frankly and honestly I don’t really realize yet what it is. The World Cup - it’s a lot. I am very proud of this team and I’m very proud of the players and of the technical staff, the medical staff. We were really a united group,” Griezmann said.

Griezmann, a fluent Spanish speaker thanks to his time spent as a junior footballer at Real Sociedad, was presented with a Uruguayan flag by a journalist representing the nations press. With the present draped around his shoulders in the press conference, he told of the feelings he felt in the moments before and during his first half penalty, awarded by virtue of a contentious VAR decision.

Argentine referee Nestor Pitana pointed to the spot after Griezmann’s corner was headed onto Croatia midfielder Ivan Perisic’s arm in the area, with the scores at 1-1. Although the decision was met with protestations from the Croatia players, Griezmann kept his cool to send keeper Danijel Subasic the wrong way and restore France’s lead going into the break.

“I just pretended it was a championship match and I wanted to remain calm and concentrate and I carried on I do the same trick as I normally do for penalties and it’s working at the moment,” Griezmann explained. “I hope it’s going to carry on like this but honestly I‘m very happy with the team effort and I’m very happy to be a world champion.”

Griezmann has enjoyed a stellar year as a player, the World Cup trophy adding to his Europa League win with Atletico Madrid, creating whispers about the player receiving the coveted Ballon d’Or trophy, given to the best footballer every year. However, the player himself expressed doubt as to whether the trophy would find its way into his hands.

“At the moment I really want to enjoy and have a good time with our families and the whole of the French people in France. I want to have a good holiday. And I want to be ready for the European Super Cup. As I said the Ballon d’Or is not in my hands.”