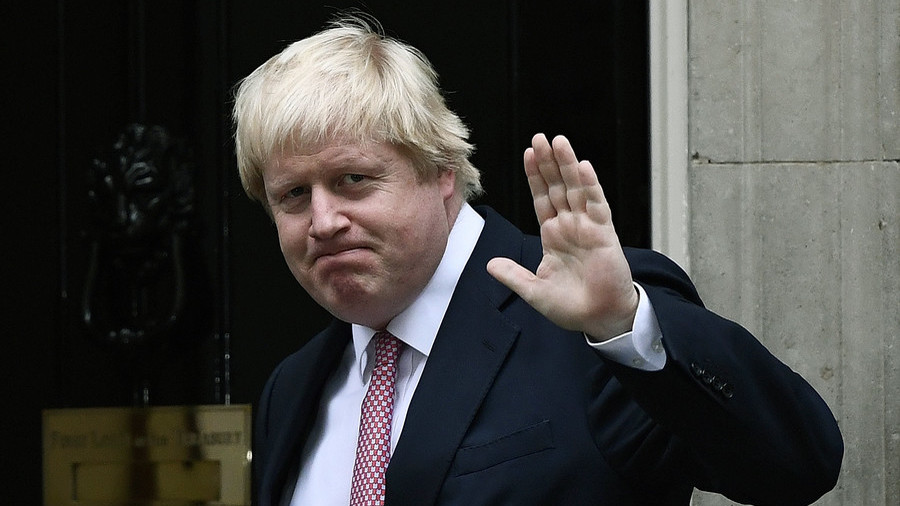 Boris Johnson has resigned as British foreign secretary, and the sporting world has been quick to poke fun at the Conservative Party politician, especially after his derogatory remarks about the 2018 World Cup in Russia.

Downing Street confirmed the departure in a statement which read:"This afternoon, the prime minister accepted the resignation of Boris Johnson as foreign secretary. His replacement will be announced shortly. The prime minister thanks Boris for his work."

Johnson infamously compared Russia 2018 to the 1936 Berlin Olympics in Nazi Germany, which was largely used as a vehicle for Adolf Hitler's regime. He also said England's participation in the competition "would not go ahead as planned" should Russia not admit alleged involvement in the poisoning of former double agent Sergei Skripal in Salisbury.

Following news of the cabinet split, former England international and 1986 World Cup Golden Boot winner Gary Lineker was among the first with a football jargon-laiden jibe comparing Johnson's resignation to a "transfer request."

Boris Johnson is the latest to hand in a transfer request as his team hurtle towards inevitable relegation.

Ex-Premier League star turned broadcaster Stan Collymore hinted that Johnson's move was all an elaborate plan to allow him time off to travel to support England in their World Cup semi-final versus Croatia on Wednesday in Moscow.

Now Boris Johnson has resigned!Brexit really, really really is going well.Isn't it?Or is he getting a flight to Moscow to join us behind the goal on Wednesday? 🦁🦁🦁🏴󠁧󠁢󠁥󠁮󠁧󠁿🏴󠁧󠁢󠁥󠁮󠁧󠁿🏴󠁧󠁢󠁥󠁮󠁧󠁿#fuckingpillock #blindleadingtheblind

So, Johnson goes - another architect of Brexit runs away from delivering what he promised.

As police investigate whether a British woman was killed by a Russian nerve agent, as English footballers play in Moscow, as British forces do their jobs in foreign conflicts, as Brexit hangs in the balance, as Trump arrives in London.....Boris Johnson quits.

And of course, the Twitterati had their own meme and gif tributes to the shock exit, some supporting the opinions of Collymore that the incident is nothing more than an excuse for a good old jolly-up while watching the foootball.

First reactions from around the country to the news of the resignation of Foreign Secretary, Boris Johnson.#BorisJohnson#BrexitShambles#PeoplesVote pic.twitter.com/FMHMuoYPTb

Boris Johnson a late call-up to Gareth Southgate's squad for their #WorldCup semi-final on Wednesday? pic.twitter.com/Kn9FLLu43o

Boris Johnson has resigned and England are in the semi finals of the World Cup! This week is going from strength to strength. 👍🏼 #WorldCup #littlebitofpolitics #bestweekever

England are in the semi final of the World Cup and Boris Johnson is no longer our foreign secretary. Someone pinch me

Wait... you’re saying we could see Boris Johnson quit as foreign secretary and #England win the World Cup in the same week?William, go and get a lottery ticket, this could be a very lucky week!

The departure of former London Mayor Johnson represents yet another blow to the government of Theresa May, who is pushing for a soft Brexit plan that has angered many Conservatives.

Johnson's quitting follows that of the Brexit secretary, David Davis, and his No 2 at the Department for Exiting the EU, Steve Baker. Rumors began swirling earlier on Monday that Johnson would be leaving his post, as he was holed up in his residence with his closest advisers, missing a scheduled appearance at the West Balkans summit. There were also reports that he missed a Cobra meeting about the Wiltshire Novichok poisoning.