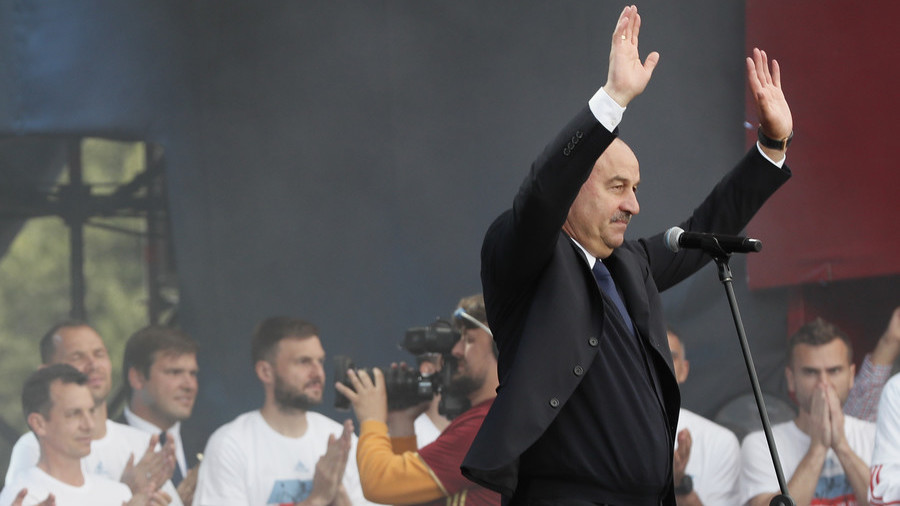 Russian football manager Stanislav Cherchesov has promised an even better performance at the 2022 World Cup in Qatar. He made the pledge during a meeting with fans in Moscow following Russia’s elimination from the World Cup.

“We wanted to go further, but unfortunately we failed to make it this time,” Cherchesov told fans who came to Vorobyovy Gory to greet their football heroes, TASS reported.

“We’ll do it better at Qatar in four years term. But this goal will be difficult to accomplish without you, so you should go to Qatar with us.”

The Sbornaya were eliminated from the World Cup on Saturday after losing a quarter-final thriller against Croatia, who claimed their second penalty shootout win in a row.

Cherchesov’s men fought courageously against their Croatian opponents, forcing the game into penalties after Mario Fernandes headed an equalizer with just five minutes left in the extra time.

Read more
'And there was still 100 minutes to go in the game': Russia posts pic of defender's gruesome injury

However, Russia’s efforts to save the game appeared to be in vain after Smolov and Fernandes missed their penalties, allowing Croatia to advance to the semi-final.

The players were visibly frustrated following the painful loss, but rose to the occasion to thank the 50,000-strong crowd at Fisht Stadium in Sochi, who fiercely supported them during the match.

Russian fans labeled the team’s World Cup run as ‘historic’ and ‘unbelievable,’ praising the players for their on-pitch heroics that saw them to reach the tournament’s quarter-finals for the first time in the country’s history.

“Dear friends, I have only two phrases to say: We are happy for having such fans," said team captain Igor Akinfeev, who saved two penalties in the shootout against Spain to help Russia set up the quarter-final clash with Croatia.

"We played for you with your heart and soul, these guys have made history,” he added.