Croatia 2-2 (4-3 pens) Russia: Croatia through to semis with pulsating penalties win over hosts 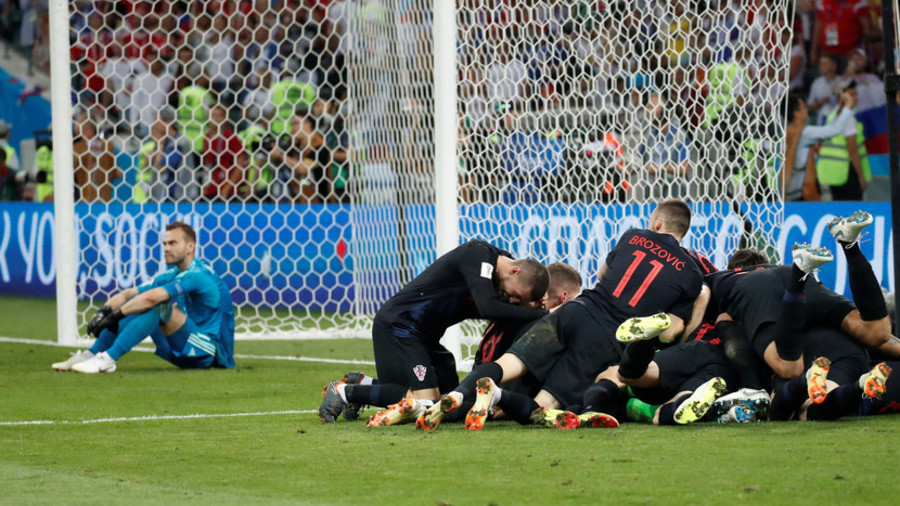 Croatia provided a dagger to the hearts of Russia with a dramatic penalty shootout win in their quarterfinal in Sochi to bring an end to the hosts’ heroic run in their home World Cup.

Russia opened the scoring on the country’s Black Sea coast at Fisht Olympic Stadium with a corker from top scorer Denis Cheryshev. That strike was canceled out eight minutes later by a Andrej Kramaric header.

Neither side could find a breakthrough within 90 minutes, which meant both sides were forced into extra time for the second time in their two knockout games. A Vedran Corluka goal put Croatia in front in the first half of extra time before Mario Fernandes levelled in the second.

That meant penalties would decide the match, with Croatia running out winners and setting up a date with England at Luzhniki Stadium in Moscow.

Sochi is almost an absurd place to hold a football match, let alone a World Cup quarter final. Nestled into the fringes of the Black Sea coast, the town is a popular domestic resort for Russians, many of whom seemed to view the biggest match of their country’s history as coincidental.

As the day wore on and the match beckoned, pockets of tourists and families carrying buckets and spades were replaced by bodies wrapped in Russia tricolors and red and white chequered flags singing together.

After the majority of them had watched England make their way past Sweden 2-0 in the day’s other quarterfinal in Samara, they traipsed to Fisht Olympic Stadium, a beacon of Sochi 2014 legacy situated a pebble-throw from the beach, knowing a date with The Three Lions in Moscow awaited should they win.

Given what was at stake, there was early show of nerves by either side when play got underway on a balmy summer evening. Igor Akinfeev was more than once called into action in the opening moments and each time displayed his class that was so apparent versus Spain to keep Ante Rebic’s effort out.

The first clear chance for the hosts fell to Artem Dzyuba on the volley, who cannoned a shot off Lovren’s backside from ten yards out. At the other end, Mario Mandzukic screwed a right foot shot high and wide from a similar position in the first ten or so minutes.

Ilya Kutepov brought down Rebic on the left hand edge of the area but Ivan Rakitic could only steer the ball over from the resulting free kick. Having seemingly exerted their excess adrenaline, both sides relaxed into a lull after 20 minutes.

Then came the game’s opener like a crack of thunder, the type that precedes and precipitates a storm at the end of a red hot seaside day. Russia broke forward and the ball made its way to Dzyuba, so often instrumental in link up play for Russia.

The giant forward seemed to almost accidentally touch the ball into the path of Cheryshev and with almost nowhere to go, the 26-year-old unleashed a thunderous left-footed strike into the top corner to leave Danijel Subasic rooted to the spot and demonstrating exactly why Real Madrid afforded a place in their academy to the player. First blood Russia.

Following the goal Russia, admirably, continued to press, but in football a side is said to be most vulnerable directly after scoring and Russia’s neglect of defensive duties proved to be their downfall.

An equalizer came eight minutes later when Kutepov was perhaps guilty of not dealing with a through ball which allowed Mandzukic acres of space on the left hand side of the box. The Juventus man was left with what seemed like hours to pick out Kramaric who nodded home from six yards out, cue an apoplectic reaction from manager Stanislav Cherchesov. Reality had returned to the Russians, but both sides entered the break level with one goal apiece, far from the early predictions of most observers.

After the restart, play resumed much as it had begun in the first half. Just before the hour mark Akinfeev was again called into action but this time the man who could do no wrong for Russia hesitated when collecting a cross.

Mandzukic reached the ball to knock it over into center of the box, where Akinfeev again dived to reach the ball but again fell short and the ball fell to Perisic. The Croatian steadied himself as the Russian keeper scrambled back, but his shot could only find the post and bounced agonizingly back out, much to the relief of Akinfeev and the Russians among the upwards of 44,000 fans in the stadium.

At other end, substitute Aleksandr Erokhin and Mario Fernandes maneuvered a corner for Russia, from which Artem Dzyuba rose to head Aleksandr Golovin’s cross goalwards, but Danijel Subasic collected easily.

Moments later and Fernandes again got down the right, creating space to lay off to Fedor Smolov, who played it back to the Brazilian-born right-back to cross into Erokhin who fired his header just over the bar.

Croatia’s class did shine through in parts, inside the last 15 minutes the ball was nodded down to captain Luka Modric, who cleverly controlled but eventually could only spurn a shot off a Russia defender for a corner.

As time ticked away, the side that hammered Argentina 3-0 in the group stage seemed to be running out of ideas, perhaps the biggest compliment to Russia’s tactical discipline. A Modric corner found a Lovren head inside the last five minutes, but the center back could only send the ball meekly over.

In the final minutes, Subasic, Croatia’s own last 16 penalty shootout hero, collected the ball and writhed around in apparent agony. The team had made all three substitutes, but after receiving treatment near the goal, the ‘keeper was deemed fit enough to see out normal time.

The keeper was called into action in stoppage time when Smolov fired a cross-shot from a tight angle across the goal, only to palm away trouble. It was the last real action of the 90, and meant both sides headed into extra time for the second time in two knockout stage matches.

In the first half of extra time, Smolov was sent through on goal and went tumbling in the area, but Brazilian referee Sandro Ricci waved away any appeals for a penalty.

Straight down the other end, a Croatian ball into the box was scooped out for a corner. Skipper Modric stepped up to curl an outswinging ball which was met by Domagoj Vida who, traveling backwards, managed to cushion the ball goalwards and into the far corner of the net.

Heartbreak for the hosts; ecstacy for Croatia. Cherchesov this time rose from the bench with a rallying cry to the home supporters in Sochi. Those cries were heard again in the second half when Russia won a corner which Subasic punched clear into the path of Kuzyaev, who fired a shot straight down the throat of the Croatian goalkeeper. Moments later Subasic again tipped away a Russia attack in the form of a Smolov cross.

Then came the real drama. With seven minutes of the second half of extra time remaining, Josip Pivaric was booked for deliberately handling an Alan Dzagoev through ball on the edge of the area. The resulting free kick saw Dzagoev loft in a ball over to the head of Brazil-born Mario Fernandes, who guided the ball into the corner of the net to level the scores, and then proceeded to leap over the advertising stands to celebrate with his adopted nation’s fans.

Erokhin forced Subasic into a save low down to his right from range late on, but the match seemed destined to be decided other than just 22 men, and the luck of a shootout entered into the frame when the match went to penalties.

Fedor Smolov, so often the darling of Russian football, stepped up to take the first penalty but his underhit shot was saved by Subasic to immediately put the hosts on the back foot. That pressure was intensified when Brozovic netted his spot kick. Dzagoev levelled before Kovacic missed to allow Russia to pull in front.

However Mario Fernandes, the hero of extra time, dragged the ball horribly wide from 12 yards. Croatia skipper Modric then put his side in the lead when Akinfeev pushed the ball onto the post only for it to creep into the net. Veteran defender Sergei Ignashevich netted his shot only for Domagoj Vida to do the same. Daler Kuzyaev scored Russia’s third penalty, but when Ivan Rakitic coolly slotted home it signaled an agonizing end to Russia’s improbable dream.

Chants of “you’re great!” rang around Fisht after the final whistle. Although it was not their night, the host team had done their country proud. They had dared to dream the biggest dream and came short by just the thinnest of margins, as Croatia booked their place in the semi-final and denied Russia a dream Moscow date with England.