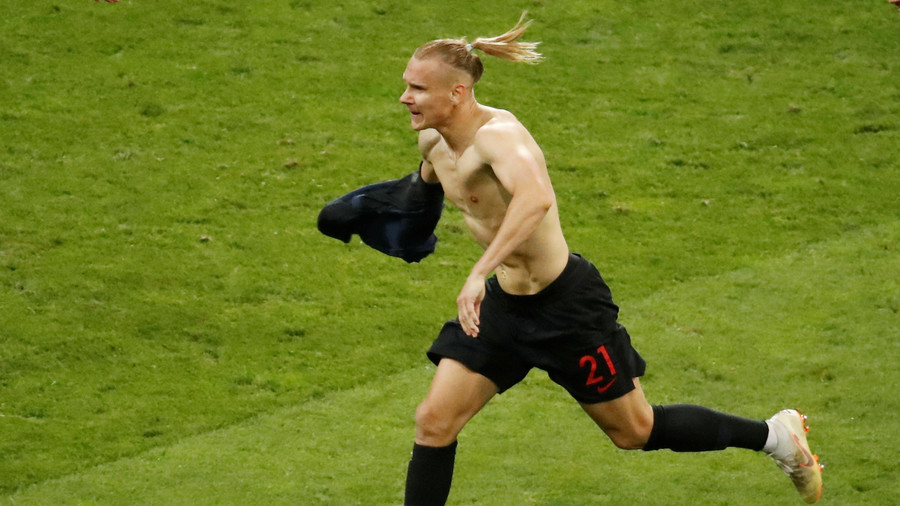 Domagoj Vida, the Croatian player who scored twice in his team's World Cup quarterfinal win against Russia, has recorded a video with his former squadmate Ognjen Vukojevic, in which they dedicate the victory to Ukraine.

"Glory to Ukraine!" defender Domagoj Vida shouts in the nine-second video, using the controversial phrase that has come to be seen as a slogan of anti-Russian Ukrainian nationalists during and after the 2014 Maidan coup. Vida played for Dynamo Kyiv from 2012 to 2018 before moving to Besiktas.

"This victory is for Dynamo and for Ukraine," adds Vukojevic, also a former member of the Croatian national squad. Vukojevic is now a scout for Dynamo Kyiv in the Balkans.

Vida later explained that his shout-out, which is certain to jar many Russian supporters, wasn't an attempt to drag politics into sport. He said it was a 'joke' that Russians will understand.

"This victory is for Croatia. No politics," he told Sports.ru. "It's a joke. I've got friends there [in Ukraine] since Dynamo Kyiv, I didn't mean anything else." When asked if he was worried that Russian fans might not get the joke, he said, "Why wouldn't they?"

"I like Russian people. It was just a joke."

Before becoming widely known as a patriotic motto of some modern Ukrainians, the slogan “Glory to Ukraine!” was previously used by nationalist paramilitary group, the Ukrainian Insurgent Army (UPA) during the WWII. The UPA is infamous for actively collaborating with the Nazis and unleashing an ethnic cleansing campaign against the local Polish minority.

The 2018 World Cup saw a similarly divisive political gesture earlier, when two Swiss players marked their win over Serbia with an 'Albanian eagle' salute, showing their support for the breakaway region of Kosovo, which Serbia doesn't recognize as an independent state. FIFA subsequently fined Granit Xhaka and Xherdan Shaqiri, both of whom share an ethnic Albanian descent, an equivalent of $10,000 each. On the same day, it fined the Serbian FA $54,700 for fans displaying discriminatory banners and throwing objects during the game against Switzerland.