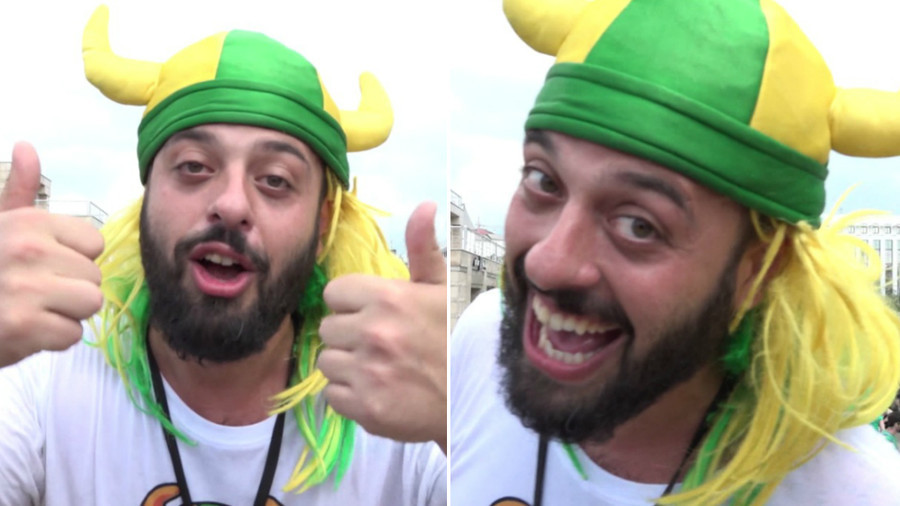 Brazilian cult hero fan Tomer Savoia is enjoying his World Cup experience so much that he has called on Russian President Vladimir Putin to grant him citizenship.

Savoia shot to fame in the World Cup host country after a viral clip showed him demonstrating his colorful Russian skills, shouting “Russia is f***ing awesome, bro,” ahead of his team’s first group game against Switzerland in Rostov-on-Don.

Filmed in his trademark yellow and green Viking horns hat, complete with matching wig, he’s now been heard professing his love for the country again.

Most recently talking to Ruptly, the Brazilian called on Russia President Vladimir Putin to grant him citizenship to prolong his stay in the country.

Famous #WorldCup fan from #Brazil🇧🇷, #TomerSavoia asks #Putin to grant him citizenship of #Russia🇷🇺, like a #bro

Savoia is in Kazan, where Brazil take on Belgium in their World Cup quarter-final on Friday.

The Samba Boys fan, who works as a journalist for the Brazilian outlet of 90min sports website, had earlier told RT of his love for Russia.

“We're loving you. We're really loving Russia, we're really enjoying Russia. And it's a surprise for me. I'm surprised how warm you are, surprised [with] the hospitality of you," Savoia said. "Russia's the best!" the cult fan hero added.

The Samba Boys are bidding for a sixth World Cup title, and were met by a raucous crowd of fans on arrival at their team hotel.

Star forward Neymar has even had a mural painted in his honor in the city – joining the illustrious company of Lionel Messi and Cristiano Ronaldo.