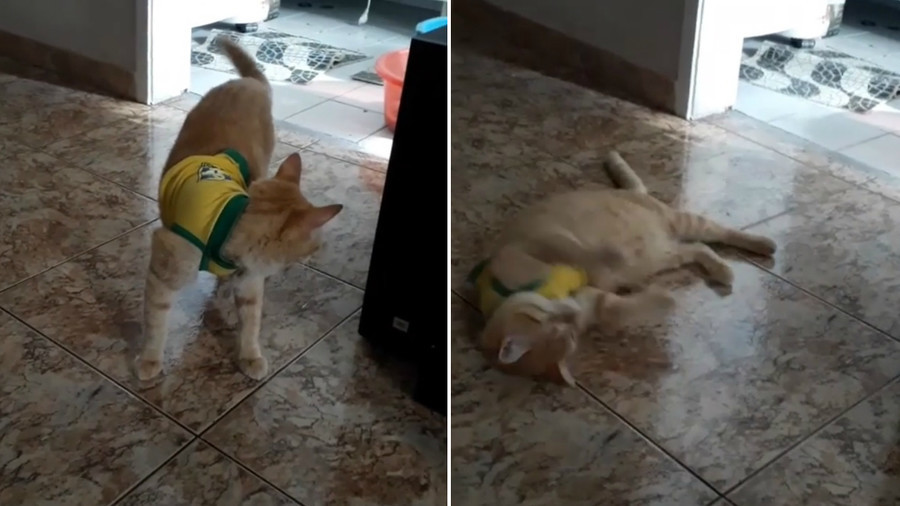 A Brazilian fan has trained her cat to repeat Neymar’s signature on-pitch rolling performance, an act for which the striker has been widely criticized and caustically ridiculed on social media.

Neymar’s antics have caused an avalanche of Twitter memes mocking the PSG man’s grass twisting, which was deemed "disgraceful" by some football pundits.

The video clip posted on Instagram and captioned ‘How does Neymar do it, Odin?’ shows a cat dressed in a tiny Brazil jersey falling on his side on command.

One internet user even suggested giving Neymar an Oscar in recognition of his outstanding acting talent.

Another fan from Colombia taught his cat to scream "goooal" to celebrate his team’s goal-scoring moments.

To the great regret of the fan and his well-trained pet, Colombia’s World Cup campaign came to an end, after the Latin American squad was eliminated by England in a dramatic shootout series on Tuesday.

Some football fans creatively dressed their pets in national jerseys to show their full support and devotion for the players who are fighting for the golden Cup in Russia.

A winged football fan was found in the Russian city of Kirov, which has caught football fever despite not being among the 11 World Cup host destinations.