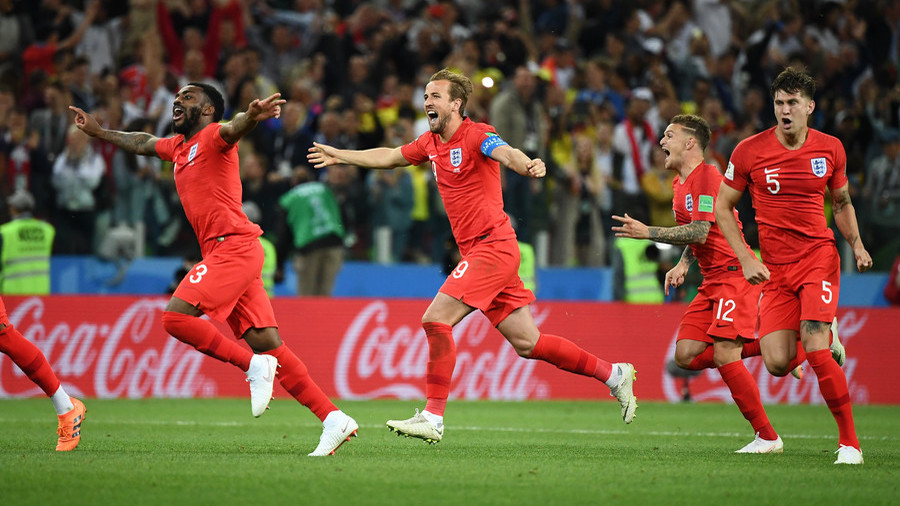 England have knocked Colombia out of the Russia 2018 World Cup with a dramatic penalty shootout victory to exorcise their spot-kick demons and progress to a quarter-final versus Sweden in Samara.

The game finished 1-1 after a 57th minute Harry Kane penalty was canceled out in normal time stoppage time by a Yerry Mina header at the very death from a corner with every Colombia player piled into the box.

England finally won a shootout with Eric Dier's spot kick after a heroic Jordan Pickford save in the shootout and a missed Colombia penalty gave them victory.

Before kick-off, you’d have been forgiven for thinking the match was being played in Bogota, such was the presence of Colombia fans at Spartak Stadium. The surreal sight of sections of yellow shirts in the upper tiers of Moscow’s second World Cup venue stood above flags that read ‘Swindon’, ‘Chesterfield’, and ‘Macclesfield Toffees’.

However proudly sung by Harry Kane and his England team, ‘God Save the Queen’ was a mere murmur to ‘¡Oh gloria inmarcesible!’ in the stadium. When the action got underway, England began the brighter of the two, a series of early corners on both sides were well defended by a compact Colombia.

Their first chance on goal came when Raheem Sterling won a free-kick on the edge of the box near the left-hand touchline from a handball, Ashley Young’s cross-shot was pounded away by David Ospina.

Despite a few early nervy patches where Kane and Sterling were both guilty of giving the ball away cheaply, England battled well and had most of the first-half action their own way, although captain Kane sometimes was forced to drop deeper down the field, even playing in the pocket just in front of the back four.

It was Kane who had probably England’s best chance of the first half when Kieran Trippier flashed a tantalizing ball across goal, but the striker could only direct the ball at full stretch over the goal.

In midfield, Jordan Henderson provided a huge presence but his antics after an apparent headbutt from Wilmar Barrios in the area while awaiting a Trippier free kick from less than 25 yards precipitated  scathing reaction from Colombia’s players. Replays showed Barrios may have been lucky with just a yellow card.

As the first half went on, England looked to grow in confidence on the ball, Harry Maguire having a head cool enough to play out from the back. He was the rock of a back four that kept veteran Colombian skipper Radamel Falcao extremely quiet. A misfit during his short spell in English football with Manchester United and Chelsea, Falcao was again made to look lonely by English players.

Ironically it was Colombia’s best chance of the half that was to be the last action for the first 45 minutes, Juan Quintero rifled a shot down the throat of Pickford, who gathered easily.

The second half carried on in much the same vein as the first, with Colombia struggling with England’s physicality. England got their breakthrough when Kane was bundled over by Carlos Sanchez in the area from a Trippier corner. After seemingly endless protestations from the Colombia players, skipper Kane remained cool and stepped up to fire England into the lead and maintain his status as the tournament’s top scorer with six goals in his three games.

What ensued after the goal was more Colombian frustration as they failed to find a way past England on a small pitch that didn’t allow for Colombia’s counter-attacking style to get going. A spate of yellow cards ensued, including for Carlos Bacca. For a moment it looked as though referee Mark Geiger from the USA would lose control of the game

England did continue to push, Dele Alli could have perhaps done better from a Trippier ball into the area but his header went over. Then Sterling broke away with the ball and laid it off to Lingard who bounded into the area. The Manchester United man went down under a challenge from Davinson Sanchez, but this time Geiger gave nothing.

Right at the death, a mistake in the England backline led to a corner in injury time. The entire Colombia team including Ospina piled into the area, but the ball found the head of center back Yerry Mina who headed the ball into the turf and bouncing high off the head of Trippier on the line and into the net.

Extra time failed to separate the two teams even after Danny Rose and Jamie Vardy went close, so a penalty shootout was needed to decide the game with Colombia winning the toss and electing to kick towards a large group of their fans behind the goal.

Captains Falcao and Kane were first to step up and net their spot-kicks. Cuadrado then netted, as did Rashford and Muriel. Henderson’s effort was saved by Ospina, but that was made level when Uribe rattled the bar. Trippier then scored to put the pressure back on Colombia. Bacca’s shot was then kept out with a strong hand by Pickford to put the fate of the English nation in the hands of Eric Dier, who rifled home to ensure England progressed and exorcised their shootout woes.