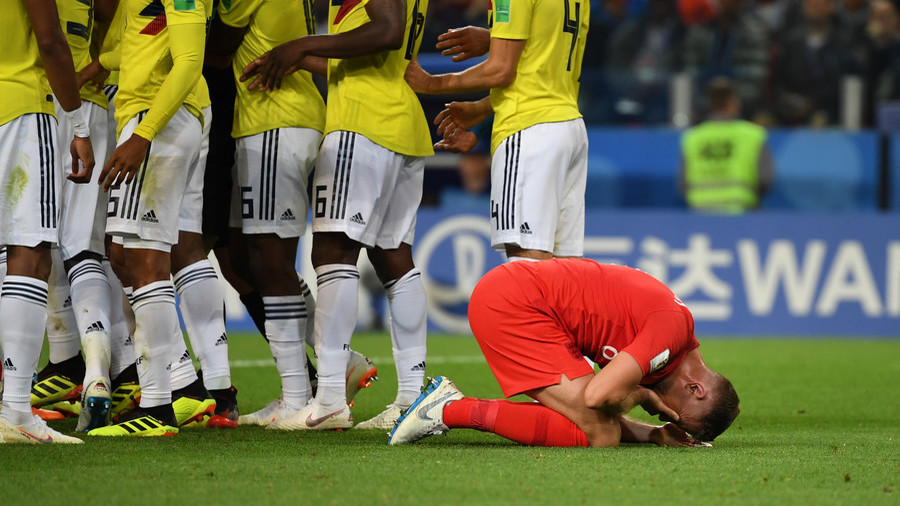 England midfielder Jordan Henderson isn't a name many people would associate with play-acting, but he's divided opinion after going down from a headbutt by Colombia defender Wilmar Barrios in the teams’ World Cup last 16 game.

Henderson went down holding his face in the first-half of the game at Spartak Stadium after grappling with Colombia defender Wilmar Barrios as they jostled for position in the wall before an England free-kick.

Barrios planted his head into Henderson’s chest and then upwards into his face, causing the midfielder to go to ground.

The contact was definite and firm, and Barrios earned a yellow card for the indiscretion, which many firmly felt should have been a red by the letter of the law.

But others felt Henderson’s reaction in dropping to the deck was equally unbecoming, and was more reminiscent of the man who is currently most-maligned as football’s diver – Brazil star Neymar.

Imagine if Neymar reacted like Henderson did. The entire European media and the UN would be calling for him to be banned from football.

Love it how all those people slating Neymar are now screaming ‘penalty! Red!’ Henderson antics no different to Neymar

God, I really hope Henderson doesn’t lose an eye from that ‘headbutt’. Oh, it seems like he’s fine now. Thought he might lose an eye. Because that’s what he was holding.

So did Henderson exaggerate the contact there when he fell like he was shot and then jumped up as soon as the ref came, or is it only when Neymar does it?

Get up Henderson absolutely pathetic. Love the game but the antics are disgraceful.

The apparent disapproval of Henderson's actions could perhaps be put down to the notion that England players are not normally associated with football's darker arts.

Others, including ex-England star and prominent TV pundit Gary Lineker, stuck to the fact that there was definite contact, and that Barrios appeared to have enjoyed a let-off that would have seen his team down to 10 men for most of the game.

Yellow card for a headbutt. You have to be kidding.

Barrios headbutts Henderson but gets a yellow card. WTF?

What the fuck? He's been given a yellow for headbutting Jordan Henderson. HOW IS THAT NOT A RED? #WorldCup #COL #ENG #COLENG