From Titanic to The Undertaker - Maradona memes circulate after crazy celebrations 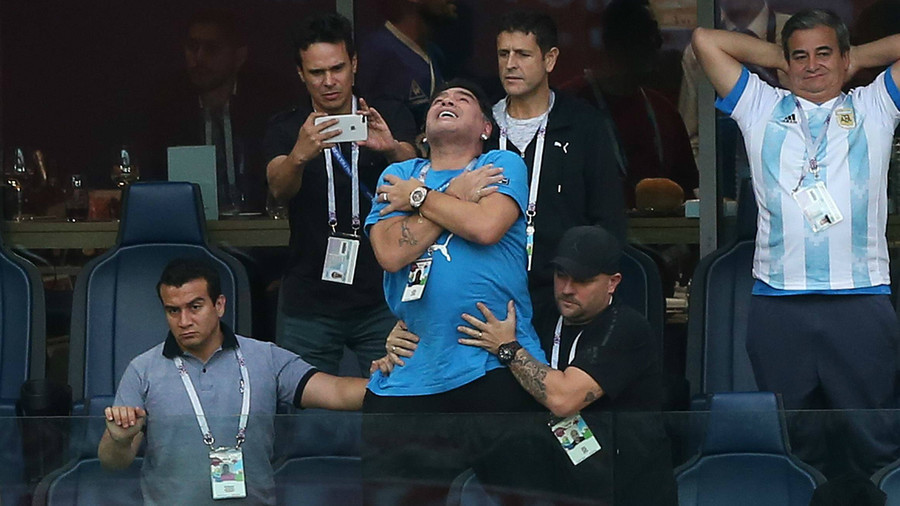 Argentina icon Diego Maradona has caused a Twitter storm of memes depicting the former Albiceleste number 10 in famous film clips and music videos after his bizarre reaction to Lionel Messi's opener against Nigeria on Tuesday.

When Messi fired Argentina into the lead on 14 minutes, Maradona appeared to exert his emotions skyward with his arms outstretched, before crossing them across his chest as if to bless himself, and then roll his eyes into the back of his head as if possessed by an other-worldly force.

Unsrurpringly, Twitter was awash with memes placing Maradona in humorous well-known scenes from Titanic to Queen's Bohemian Rhapsody video to The Undertaker's entrance.

As if that wasn't enough, Maradona again made headlines after Marcos Rojo scored a dramatic late winner to send Argentina through to the knockout stages with four minutes left. To celebrate, Maradona sensationally gave a double middle finger salute to the crowd.

After the match, which Argentina won 2-1, Maradona was filmed being helped from his seat and into the VIP box after his exertions, later being treated by paramedics.

Reports then emerged that the 1986 World Cup winner had spent the night in hospital, but the football legend, known for his unhinged and unpredictable behaviour on and off the pitch, then reassured fans that he had in fact not gone to hospital, but had just hurt his neck.

“I want to tell everyone that I am fine, that I am not, neither was I interned [in hospital]," he wrote on Instagram.

“In the halftime of the game against Nigeria, my neck hurt a lot and I suffered a decompensation. I was checked by a doctor and he recommended me to go home before the second half, but I wanted to stay because we were risking it all.

“How could I leave? I send a kiss to everyone, thanks for the support!”

With the result, Argentina booked a date with France in Kazan on June 30, after having recorded a draw and loss to Iceland and Croatia respectively in their first two group games.