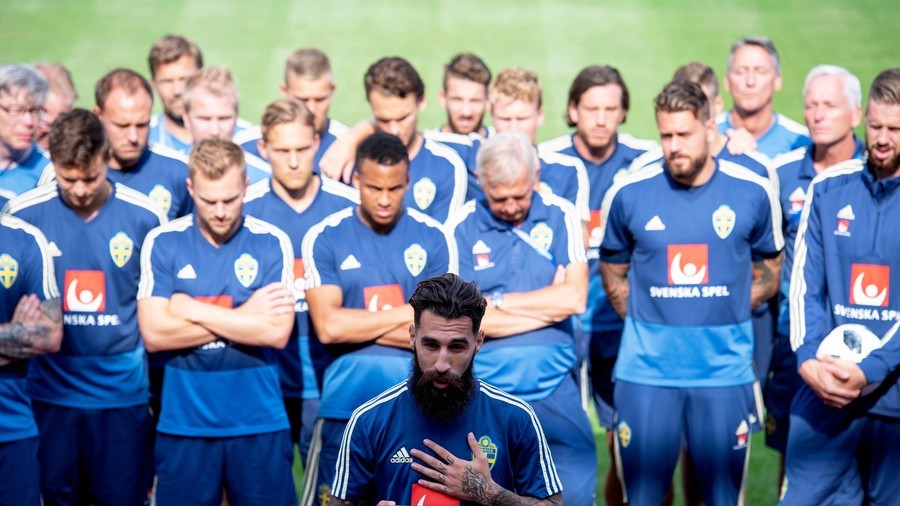 Sweden have put on a strong show of unity after winger Jimmy Durmaz was subjected to death threats for his role in Germany’s late winner in the teams’ World Cup group match in Sochi.

Substitute Durmaz gave away the free-kick that led to Toni Kroos’ stunning goal in the 95th minute, which handed Germany a 2-1 win in their Group F game in at Fisht Arena on Saturday.

After the game, Durmaz faced a barrage of abuse on social media, including racist insults and death threats.

At Sweden's training session on Sunday, Durmaz, whose parents emigrated from Turkey and are of Syriac descent, read out a statement on his cell phone as his teammates stood in unison behind him. The player posted the clip on his Instagram account.

Tacksam och ödmjuk för all kärlek jag fått från alla underbara människor där ute fortsätt sprid kärlek och låt kärleken övervinna allt hat där ute ❤️❤️❤️❤️ I’m humbled and overwhelmed from all the lovely messages I’ve received from all of you ❣ it really warms my heart after what happened last night. Keep posting love so it will overcome all the hate out there ❣❣ #fuckracism #fuckrasism #viärsverige

“I am a footballer at the highest level, being criticized is something we live with, but being called ‘f***ing immigrant’ and ‘suicide bomber’, and having death threats made against me and my children is completely unacceptable,” Durmaz said, according to Reuters.

“I am Swedish, and with pride I wear our shirt and our flag. I want to thank the fine, wonderful people who spread joy. It warms us all. We stand united, we are Sweden,” he added.

The entire Swedish squad then shouted “f*** racism” in unison, before heading off to start their training session.

The abuse was also reported to the police, and the general secretary of the Swedish FA, Hakan Sjostrand, condemned the threats directed at the player.

“We do not tolerate a player being subjected to threats or abuse. It’s uncomfortable and very upsetting to see the treatment that Jimmy Durmaz has had to put up with. Completely unacceptable,” Sjostrand said, Reuters reported.

Sweden’s agonizing late defeat to the Germans also prompted a furious touchline clash between the two sets of staff.

‘They rubbed our faces in it’: Sweden & Germany in touchline clash after late World Cup drama

Swedish coach Janne Andersson and his fellow Swedish staff confronted the German bench after what they felt was over-exuberant celebration that bordered on taunting.

“That got me really annoyed and angry,” Andersson said after the game. “Some of the [German] group leaders of their team celebrated by running in our direction, rubbing it in our faces by making gestures.”

READ MORE: ‘They rubbed our faces in it’: Sweden & Germany in touchline clash after late World Cup drama

The result in Sochi means Group F is wide open going into the final round of games on Wednesday.

Mexico are top of the group on six points, while Germany and Sweden both have three points from their two games, ahead of the South Koreans on zero points.

The Swedes take on Mexico in Ekaterinburg, at the same time as Germany face South Korea in Kazan.