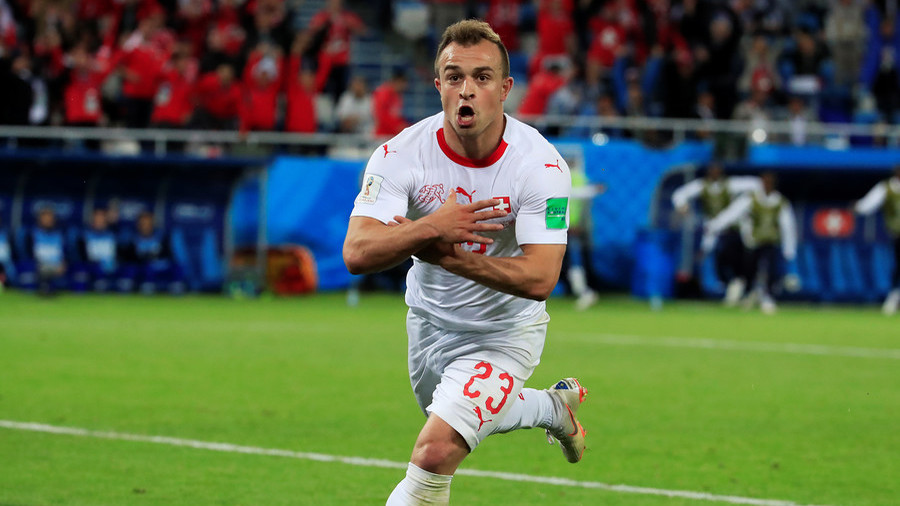 World football governing body FIFA has opened disciplinary proceedings against Swiss players Xherdan Shaqiri and Granit Xhaka, after the pair celebrated their goals in the win against Serbia by making an Albanian eagle salute.

The players are both ethnic Albanian and celebrated their strikes in the match against Serbia by making the controversial sign in apparent reference to the eagle symbol on the Albanian flag.

Shaqiri also played in boots decorated with Swiss and Kosovo flags in the World Cup Group E match in Kaliningrad.

Their goals overturned a 1-0 deficit after Aleksandar Mitrovic had given Serbia an early lead, but the celebrations sparked controversy for their apparent political undertones.

The Serbian FA said it would file a complaint against the pair, and FIFA has now confirmed it will investigate the incidents, according to TASS.

The football governing body has also reportedly begun a probe into supposed comments made by Serbia coach Mladen Krstajic after the controversial World Cup encounter, as well as against the Serbia FA for potential “crowd disturbance and the display of political and offensive messages,” according to the Guardian.

Xhaka and Shaqiri could face potential sanction under FIFA rules which outlaw actions that “provoke the general public.”

Kosovo ceded from Serbia in 2008 and was made a FIFA member in 2016. However, its independence remains a contentious political issue, as it has not been recognized by an array of countries, including Serbia and Russia. Kosovo is mostly populated by Albanians.