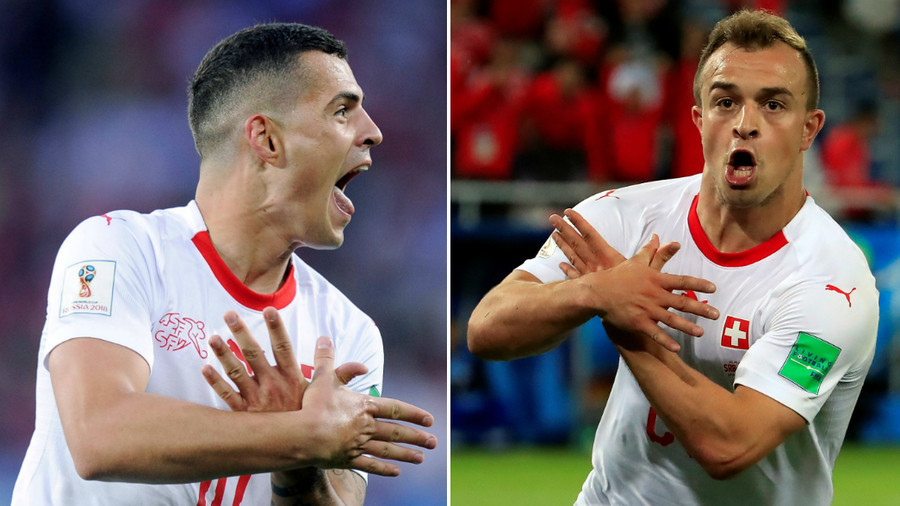 The Serbian football association says it will demand that FIFA take action against Granit Xhaka and Xherdan Shaqiri for their eagle salute goal celebrations in Switzerland’s 2-1 World Cup win in Kaliningrad on Friday.

Shaqiri and Xhaka, both of whom were born in Kosovo and are of Albanian descent, celebrated their goals in Switzerland’s comeback win by making an eagle salute in apparent reference to the Albanian flag.

The Football Association of Serbia (FSS) has said it will protest the players actions with FIFA, as well as a rejected penalty appeal for a challenge on forward Aleksandar Mitrovic with the scores level at 1-1 in the second half.

“We think we were roughly injured in the 66th minute and we're sure to file a FIFA appeal,” FSS secretary general Jovan Surbatovic said, the Telegraph reported.

“But that controversial detail in the 66th minute is not the only reason we will write FIFA. This is the case of the boots, it is a question of several controversial flags and it is the celebration of both goals for Switzerland.”

Kosovo is a member of FIFA, but dozens of countries, including Serbia and Russia, do not recognize it as a sovereign state, after its controversial declaration of independence in 2008.

The players could be sanctioned under FIFA rules which outlaw actions that “provoke the general public.”

After the game, midfielder Xhaka posted a picture of his celebration on his officials Facebook page, but told the press “frankly, my opponents did not interest me at all.”

“It was for my people, who always supported me. For those who did not neglect me, in my homeland, where my parents’ roots are. These were purely pure emotions,” the Arsenal midfielder added.

Shaqiri responded by saying “it’s just emotion” when questioned about the controversial celebration.

Swiss coach Vladimir Petkovic, who himself was born in Bosnia, appeared to condemn the pair’s actions, saying: “You should never mix politics and football.

"It’s clear that emotions show up and that’s how things happen,” he told reporters after the game.

The due proved Switzerland’s heroes as they overturned a 1-0 deficit to run out winners in a pulsating World Cup Group E encounter.

The Serbs had taken the lead through a fifth-minute header from Aleksandar Mitrovic, before Switzerland struck back with a fierce drive from Xhaka on 57 minutes, before Shaqiri burst free from the half-way line to score in the last minute.

The Serbs take on Brazil in Moscow in their final group game on Tuesday, at the same time as the Swiss play an already knocked-out Costa Rica.