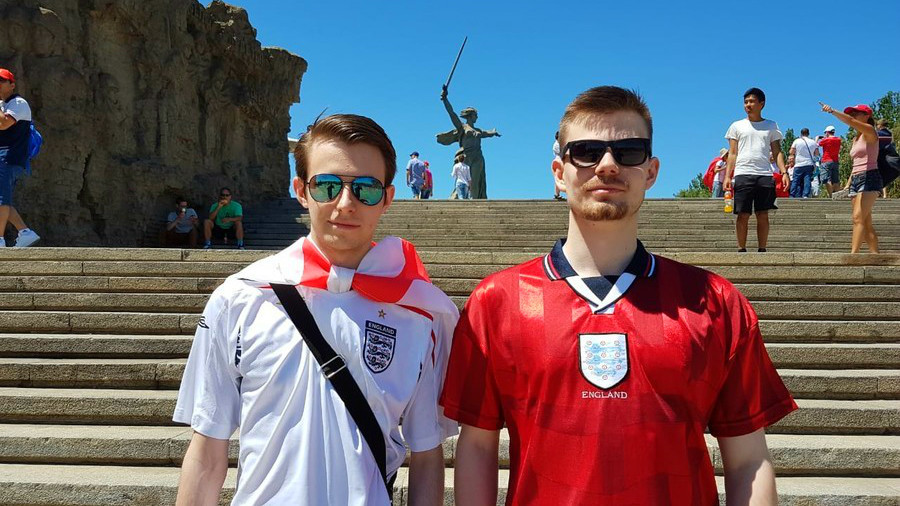 England fans have been paying their respects in Volgograd at the city’s memorial complex dedicated to the victims of one of the bloodiest battles of World War II.

England open their World Cup campaign against Tunisia at Volgograd Arena on Monday night. Ahead of the kick-off, many supporters took the time to visit the Mamayev Kurgan memorial, which pays testament to the city’s tragic past.

A selection from the Mamayev Kurgan memorial complex - highly recommended visit for any England fan in Russia pic.twitter.com/i4RgpN7Xsz

Formerly named Stalingrad, the city saw more than 1 million people killed, wounded or captured between 1942 to 1943 in the battle between Red Army forces and the Nazis.

The Soviet victory was seen as a key turning point in the war, and the tremendous losses suffered means the Battle of Stalingrad has been etched into the Russian psyche ever since.

England manager Garth Southgate has spoken eloquently about the location for his team’s opening World Cup match, and how the venue puts football into perspective – even when the stakes are as high as the World Cup.

England fans themselves arrived in Volgograd with particular focus on the sensitivity of the location and the unsavory recent history with Russian fans at Euro 2016.

However, English fans visiting the memorial complex under clear blue skies on Monday were well aware of its significance.

John and Ciaran made the trip to Volgograd from London and Kent respectively for the game against Tunisia, and were making their way down from the top of the complex.

“You can tell the respect they have for the place, it’s impressive,” Ciaran said. “I don’t know if we have anything in England quite this scale, I mean a whole park dedicated as a war memorial. The statue really shows you the scale.”

Ciaran was referring to the giant Motherland Calls monument which stands at the top of the Mamayev Kurgan complex, and is visible from Volgograd Arena, where England will face Tunisia.

Ciaran said the trip to the city on the Volga was an opportunity to visit a site of historic importance and enjoy the World Cup currently taking place in Russia.

“We’re quite big on history, the fact we can come here for a World Cup and double up as a history trip is quite impressive, it’s quite unique – a once in a lifetime thing.”

John agreed that despite the negative reports in the UK press leading up to Russia 2018, with many warning fans off making the trip, their time in Russia had been nothing but positive.

“Everyone’s defied what was expected from the press back home. I haven’t seen any trouble, everyone’s been really friendly,” he said.

Theo and his father Stephen are also in Volgograd to watch the England game.

Theo is half Russian through his mother, and he and his father are conscious of the importance of the Battle of Stalingrad in the nation’s history.

“I’ve found it very moving, obviously we know all about the battle of Stalingrad, we’re fully aware of the great contribution Russia made during the Great Patriotic War, and to actually be here, it’s quite touching,” Stephen said.

Theo, who is a vlogger for England and Bolton Wanderers, added: “It’s a beautiful monument, and you’ve got to be respectful for everything they’ve done.”

They also said the notion that England fans should be wary of making the trip to Russia had proved a fallacy so far.

“I’ve lived and worked in Russia, but a lot of my friends who have been to the World Cup for the last 20 years have not come, because of the mainstream media in the UK has been very negative on Russia,” Stephen said.

“I’ve spent enough time in Russia to know that that is nonsense. We’ve loved every minute so far.”

“We’ve had a great time since we’ve been here,” Theo added. “The Fan Fest zone has been great.”

England fan Dave also works in Moscow, and is with fellow Three Lions supporter Pete, who is based in in Helsinki.

“The people are really friendly here, there was much trepidation about England fans coming, but I think everybody’s been made to feel very welcome,” Dave said.

Dave is also well-versed in the significance of the host city for England’s opening game, saying: “I studied Russian literature, Russian history, I’ve read a lot about it, so it was the first place of our tour, so to say.”

The pair said the number of England fans in Volgograd is somewhat sparse, but that could be put down to several things beyond the fear factor.

“There’s not just one factor, but that’s part of it I suppose,” Dave said. “There’s also the cost of getting out here, the logistical challenge.”

Morgan and James arrived from Moscow on Sunday night, and had just visited the poignant Eternal Flame memorial at the complex – where English FA officials and supporters had laid memorials.

Wreaths laid by English FA and supporters at the Eternal Flame in Volgograd. Hard not to be moved by the memorial here. pic.twitter.com/F4ubrivzhe

James said it was important for them to visit the site: “This was our number one thing to do in Volgograd, we’ve read a lot about it,” he said.

Morgan added: “Although it’s big for Russians, the Battle of Stalingrad is famous throughout the world, as a turning point in the Second World War, and obviously it’s a very emotional site for the Russian people.”

They also praised the atmosphere in the city, saying: “The mood has been happy, friendly, everyone is helping each other.”

Despite so much concern over England’s arrival in Volgograd, so far English fans’ presence has gone some way toward dispelling myths on both sides.

For English supporters, it has shown that Russians are friendly, welcoming people – quite different from what has been portrayed in much of the UK press.

For the Russians, meanwhile, it has shown the vast majority of England fans have respect, class, and are knowledgeable about their World Cup hosts.

By Liam Tyler, for RT Sport in Volgograd