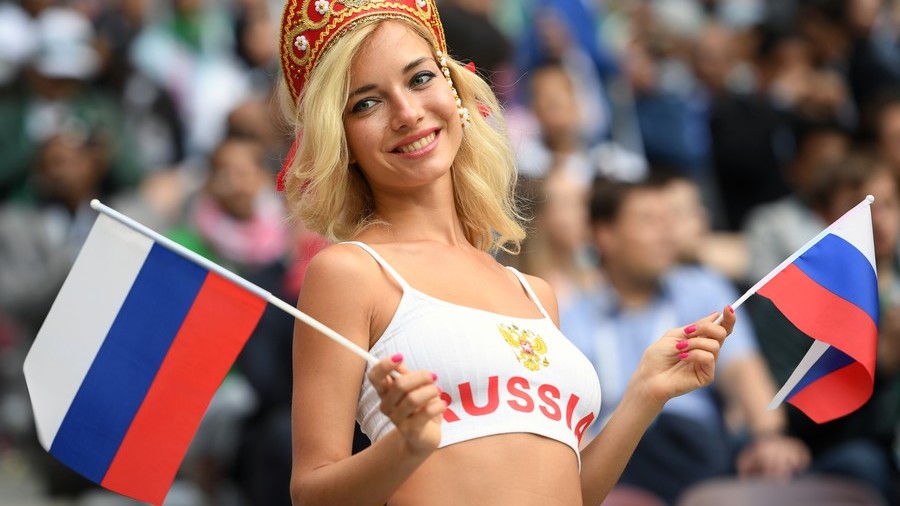 The center of Moscow exploded following Russia’s 5-0 thrashing of Saudi Arabia in the World Cup 2018 opening game in the Russian capital and RT sport was right in the mix.

Here, we bring you some of the very dancing, romancing, chanting, cheering and beer-swilling best action of the after-match afterparty.

Directly after the match, fans were snapped celebrating in their own idiosyncratic ways, such as this Brazilian fan in a Neymar Jr shirt swinging a Russian tricolor from a tower of empty plastic souvenir beer glasses.

In the town center, fans from Mexico, Colombia, Peru and Argentina took centre stage around Manezhnaya Ploshchad, Red Square and Nikolskaya Street leading supporters from nearly every nation competing at the tournament.

Crowd breaks out into chants of Ros-i-ya, naturally, for the champions for tonight #WorldCup #Rus pic.twitter.com/sREE08BzwJ

Anyone walking along Nikolskaya Street near Red Square would be forgiven for thinking that Russia had won the whole tournament and not just a single game versus Saudi Arabia.

Moscow partying as if Russia have won the tournament. Old folk songs rocking, scaling the lampposts, drinking samogon. Give us the trophy now #WorldCup pic.twitter.com/jHjYVaXngI

The pedestrian street in Moscow's Kitai-Gorod disctrict connecting the city's iconic focal point to neabry Lubyanka Square has been chosen by fans as their default base at the very beginning of the World Cup.

Two teams who proved magnetic to Russia fans were Mexico and Argentina, who welcomed passing locals into their ranks and took turns waving each toher's flags and singing for each other's teams.

Mexicans and Russians singing 'Ro-si-ya' in unison. And they say vodka and tequila together is a bad idea... #Mex #Rus #WorldCup pic.twitter.com/x2bAdhFDji

Argentinian fanatics stole a corner of the street for their own to hang flags that even featured a famous face in Homer Simpson, and also sported wigs that were more reminiscent of Marouane Fellaini than Messi. The section of Argentina fans provided the crux of the Nikolskaya action as the action wore on.

Argentina fans: from the sublime to the absurd. More Marouane than Messi #Arg #WorldCup pic.twitter.com/bhjxvoM46E

Mexico fans have already melted hearts in Moscow with their good-natured support. After the game 'El Tri' supporters were snapped lending their sombreros and posing with fans in wheelchairs outside Luzhniki.

Also mingling with locals were Colombian fans, who pinched local women as slow dance partners to the smooth music of a street saxophone player, adding a more chilled vibe to the madness.

Colombians charm the local women with a bit of jazz and slow dancing. Got to admire that #Col #WorldCup pic.twitter.com/aPrzM8P0LX

Around the corner from Nikolskaya on Manezhnaya Ploshchad stands Moscow's World Cup countdown clock, erected to count the days until yesterday's match. After the game, a sea of bodies crowded the clock with fans from Peru particularly conspicuous among the raucous swathes.

This is the scene in Moscow centre right now, overflowing with fans and led by the Peruvians #Per #WorldCup #Moscow #Москва pic.twitter.com/U01gvXMSQv

After the joyous sound of the crowd cheering and singing faded into a whisper, after the last sip of beer was drunk and the last salsa was danced...the city that never sleeps danced on and partied more, as the World Cup clock face looked on.

The Russian capital will see its next carnival of football on Saturday as the city welcomes Lionel Messia & co. for Argentina's match against Iceland in their Group C opening game. We're sure that will be another quiet occasion.