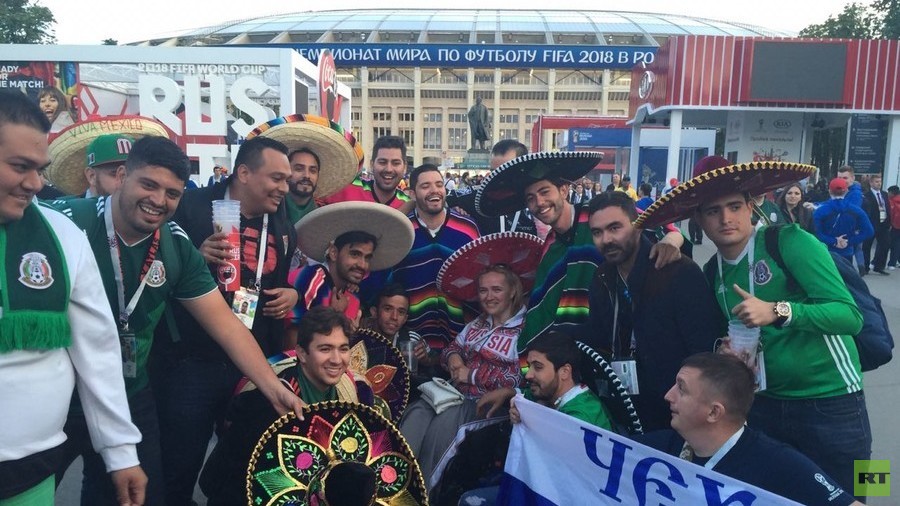 Russia impressed on the pitch with a 5-0 World Cup 2018 opening win on Thursday, but it was Mexican fans who stole hearts off it at Luzhniki Stadium by lending sombreros to disabled fans and posing for photos with them.

Russia brushed aside Group A opponents Saudi Arabia in a record 5-0 win thanks to goals from Yuri Gazinsky, Artem Dzyuba, Aleksandr Golovin and a brace from Denis Cheryshev.

Off the pitch, swathes of sombrero-clad Mexico fans descended on Moscow to watch the hosts kick off the tournament, and wasted no time making their presence felt.

Mexican culture is vastly diverse and was on display in everything from traditional Aztec clothing to 'lucha libra' wrestling masks, to more revealing outfits among the vibrant clusters of the Mexican faithful.

Pockets of supporters were easily recognizable in the stadium by their garish green shirts of the national team - known as 'El Tri' in Spanish - which have been given the retro treatment by shirt manufacturer Adidas.

After the game, supporters led a squadron of fans chanting by the foot of the Lenin statue outside the stadium to mark the victory.

Among groups of Colombians and Peruvians, Mexicans proved themselves by far the most vocal of their Hispanic counterparts with shouts of "Mexico Campeon!"

The Mexicans were perhaps buoyed by the winning North American bid to host the 2026 World Cup, announced the day before the opening game.

The tournament will be co-hosted in their homeland, along with the USA and Canada, the first time three countries will have simultaneously hosted a World Cup.

Ensuring that they won not only the minds but the hearts of fans, there was also the more touching moments, such as when Mexicans stopped outside the stadium for photos with disabled Russian supporters using wheelchairs.

Mexico will make a return to Luzhniki Stadium on Sunday, when they kick off their World Cup campaign by taking on Germany.

If the Mexican players match the energy and passion of their fans, they will be more than a match for the reigning world champions.