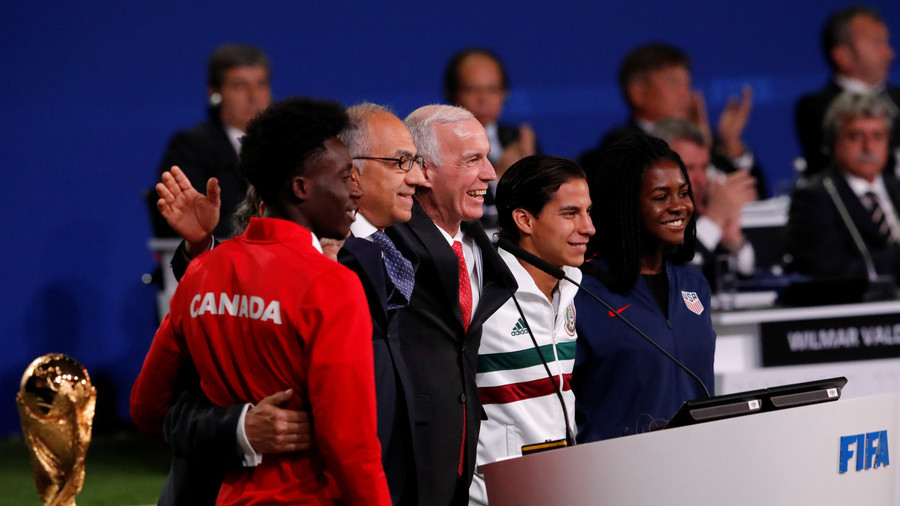 The North American joint bid comprising the USA, Mexico and Canada has won the right to host the 2026 FIFA World Cup. The decision was announced at FIFA's annual congress in Moscow on Wednesday.

The bid beat off competition from Morocco and was chosen in a vote by 203 of FIFA’s 210 member federations present in the Russian capital, one day before the World Cup 2018 opener in the city between hosts Russia and Saudi Arabia.

The 'United Bid' for the three North American countries won 134 votes compared to 65 for Morocco.

The world will unite in North America! #United2026 has officially won the right to host the @FIFAWorldCup!🇨🇦🇲🇽🇺🇸 | https://t.co/jbld3pvI99 pic.twitter.com/iBhngny42b

The North American bid was seen as a safer bet than Morocco, whose proposal was deemed "high risk" in several key areas.

The North American tournament will see games take place in up to 16 stadiums, the majority of which will be in the USA. All of the stadiums already exist, and will only require renovation ahead of the tournament.

The expanded format in 2026 will include 48 teams, playing a total of 80 matches. The US would host 60 of those games, while Canada and Mexico would hold 10 each.

The Moroccan bid offered a tournament spread across 14 stadiums in 12 cities, but would have involved an estimated $16 billion spend on stadiums and infrastructure.

We are ready to welcome the world to North America! Thank you to all who supported our vision for a united @FIFAWorldCup! 🇨🇦🇲🇽🇺🇸 pic.twitter.com/xuQAh2dBzc

An inspection report on Morocco by FIFA had highlighted three “high-risk” areas – stadiums, hotels, and transport – which were widely seen as undermining the country’s efforts to bring a second World Cup to Africa. There were also concerns over “unexplored risks” in the area of human rights.

For the USA it will be a second time as World Cup hosts, following the tournament in 1994, while for Mexico it will be an unprecedented third time after holding the event in 1970 and 1986. It will be a World Cup first for Canada.

In his acceptance speech, US Soccer Federation president Carlos Cordeiro said: “Thank you so, so very much for this incredible honor,” AP reported.

The moment our united dream became a reality! 🇨🇦🇲🇽🇺🇸 pic.twitter.com/rCTiTcxGXj

At the announcement, current FIFA chief Gianni Infantino also confirmed he would stand for re-election in Paris next year.

The 2018 edition of the World Cup kicks off in Moscow on Thursday, when hosts Russia play Saudi Arabia at Luzhniki Stadium. The tournament will be played at 12 stadiums across 11 host cities between June 14 and July 15.