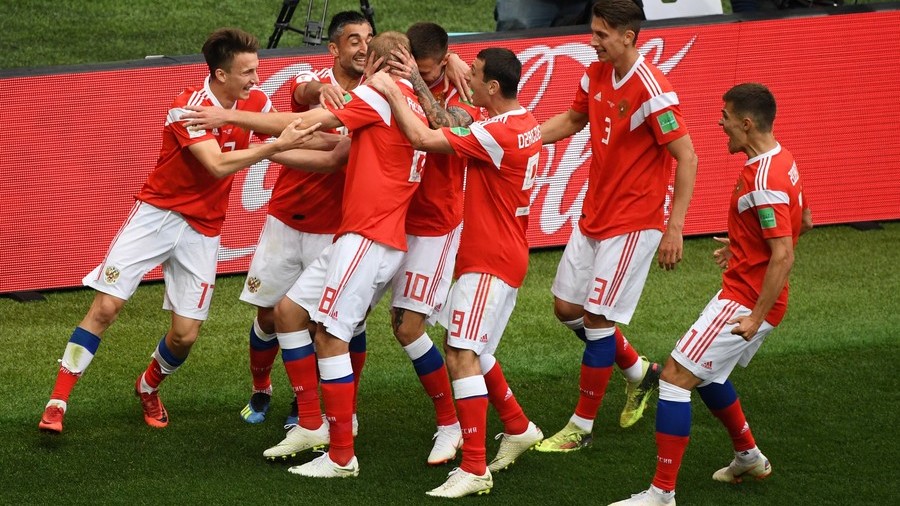 An energetic Russia secured the biggest World Cup opening match win since 1934, as it raced to a 5-0 victory over Saudi Arabia, with rising star Aleksandr Golovin at the heart of the home team’s best moves.

In a match-up of two predominantly domestically-based squads that play on different continents, with opening game jitters to take into account, even the Russian media stuck a cautious tone in advance.

But the home side in red immediately opened as the more enterprising group, ratcheting up the tempo against a Saudi Arabia that looked vulnerable at the back, though not without technical quality going forward.

The first goal arrived after 12 minutes from a neat header by unheralded 28-year-old Yuri Gazinsky, and came from a pinpoint cross from Golovin, the CSKA Moscow midfielder, who has been linked with a host of top English Premier League clubs.

Creative fulcrum Alan Dzagoev, who has often suffered misfortune around big tournaments, had to go off after just 20 minutes with a suspected hamstring injury, to be replaced by Villareal’s Denis Cheryshev.

Cheryshev, who himself suffered an injury-plagued season, doubled Russia’s lead 20 minutes later with a skill that left two Saudi players on the ground, and an emphatic left-foot shot into the roof of the net.

The Green Falcons mustered a rally in the second half, but Russia again looked the more penetrating team, with Golovin reprising his cross for another calm headed finish from substitute Artyom Dzyuba to safeguard the win, to the instant relief of embattled coach Stanislav Cherchesov.

As Saudi Arabia lost all semblance of organization, Cheryshev turned a win into a thrashing with a stunning outside-of-the-foot shot in the dying moments, and Golovin once again stole the headlines with a trademark free kick with the last touch of the game.

Having come into the game with no wins in seven matches, Russia will now face Egypt and Uruguay without undue worries about goal difference, while Saudi Arabia manager Juan Antonio Pizzi will hope not to repeat the fate of Carlos Alberto Parreira, fired by the same team after two matches in France 98.