‘Russia don’t have reason to be super optimistic,’ Mourinho warns after rout of Saudi Arabia (VIDEO) 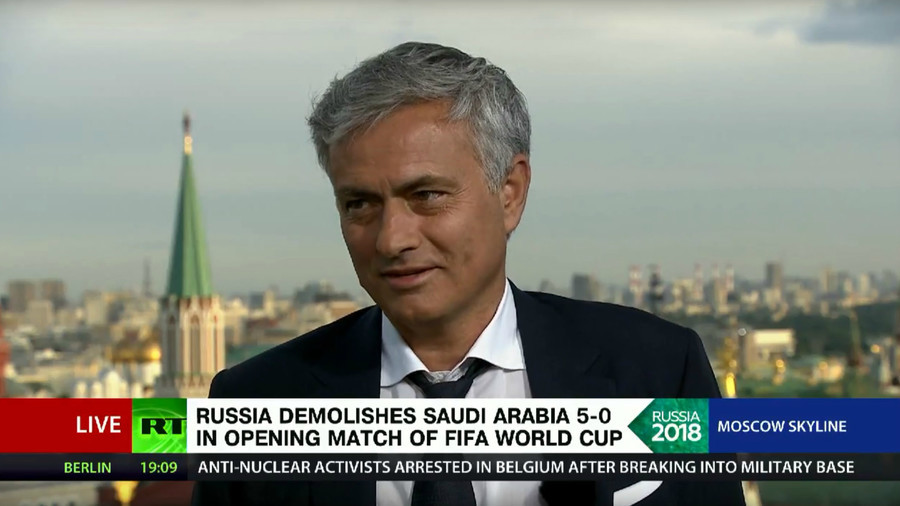 As jubilation filled the streets of Moscow, following the Russia’s 5-0 victory over Saudi Arabia, Jose Mourinho sounded a note of caution, while Peter Schmeichel said the margin of victory represented a “fair result.”

“Before the match we were speaking about Russians being pessimistic,” said Mourinho, RT’s World Cup expert, in reference to the muted coverage of the national team before the opening match.

“And after one game you don’t have a reason to be super optimistic. Be happy, it’s a good victory and a good score, and goals might be important for goal difference, but take into account that the Saudi team was disappointing.”

“Egypt is better than Saudi Arabia, and Uruguay is better than Egypt,” the Manchester United manager said in reference to the next Group A opponents Russia will face.

Another RT expert, Denmark goalkeeping legend Peter Schmeichel, praised himself for predicting that the score could end up being 5-0 at half time, when Russia was leading only by two.

“Saudi Arabia was disappointing, by any standard,” said Schmeichel, standing on a rooftop outside the Kremlin with the RT crew. “But it is a fair result, and it is fantastic for the championship that it started so well. And also for Russia because there is now an atmosphere around the team, there is now a little bit of trust in the players.”

Mourinho picked up on the theme, naming coach Stanislav Cherchesov his Man of the Match, after he had been questioned in the run-up for poor results in friendlies, constant tactical tweaks and questionable selections.

His best decision on the pitch on Thursday was an enforced one – replacing injured playmaker Alan Dzagoev with winger Denis Cheryshev, who scored two outstanding goals, and was named by Mourinho as one of the best players in the game.

The other was midfielder Aleksandr Golovin, who the coach named as Russia’s “most influential” player on the red team, saying that “he developed almost all of the organized football the team played.”