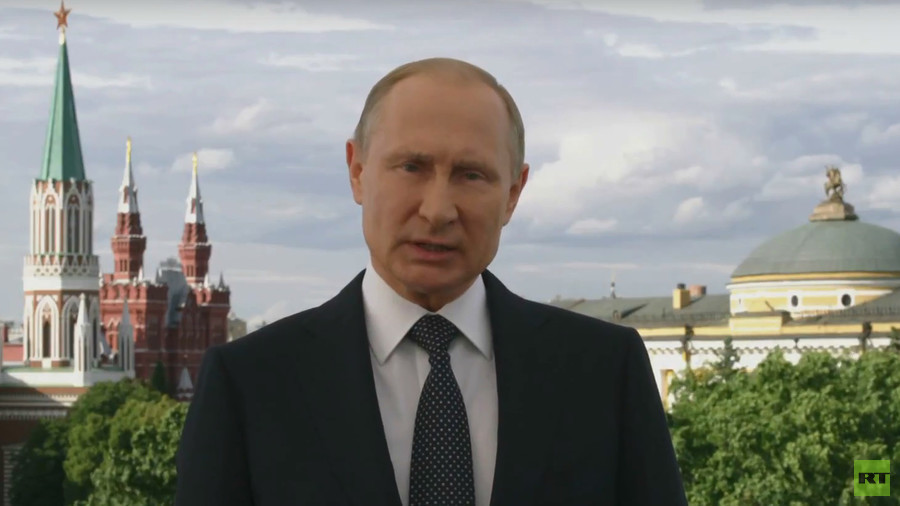 Russian President Vladimir Putin has released a personal video address welcoming each of the 32 participating nations and the millions of expected fans arriving in Russia to the 2018 FIFA World Cup finals.

With just days to go until the grand showpiece event begins on Thursday, President Putin has invited all those taking part in the first World Cup ever to be held on Russian soil to get to know Russia and enjoy a true celebration of football, diversity and culture.

The month-long football festival kicks off when host Russia take on Group A rivals Saudi Arabia on June 14 at the tournament’s grand and iconic epicenter - the newly-renovated Luzhniki Stadium in Moscow, where Putin will be in attendance.

“To all football fans and the greatest football teams on the planet — welcome!” President Putin began from the Kremlin. “Welcome to all who have already arrived in Russia, and to those who are planning to take part in this landmark international event — the FIFA World Cup."

“It is with immense joy and a great honor that we receive representatives of the great football family. We want this event to be a celebration, filled with passion and emotions.”

Moscow will play host to a total of 12 World Cup matches and is expected to welcome 1 million football fans during the tournament. The Moscow Metro underground will likely ferry 3.5 million passengers around the Russian capital during that time.

Putin implored all those visiting Russia to not only to enjoy the footballing spectacle, but also to get acquainted with its equally magnificent host nation, which will stage matches in 12 stadiums across 11 host cities.

“I hope you will have an unforgettable experience — not only watching the matches of your favorite teams and admiring the players’ skills, but also getting to know Russia,” the president said.

“Learning about its identity and culture, its unique history and natural diversity; its hospitable, sincere and friendly people. We have done our best to ensure that all of our guests – the athletes, the staff and, of course, the fans – feel at home in Russia. We have opened both our country and our hearts to the world."

Putin signs off his invitation by welcoming all to the country: “Welcome to the FIFA World Cup! It’s my pleasure to share this moment with you! Welcome to Russia!”

The 2018 FIFA World Cup will return to Luzhniki Stadium on July 15 for the final match, where the new world champions will be crowned. Aside from Moscow, the other Russia 2018 host cities include St. Petersburg, Sochi, Saransk, Kaliningrad, Kazan, Rostov, Samara, Nizhny Novgorod, Ekaterinburg and Volgograd.