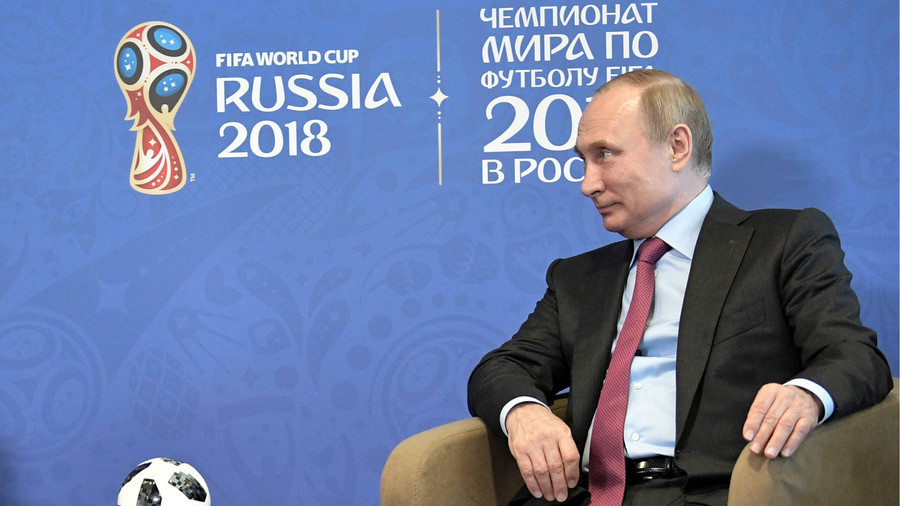 Russian President Vladimir Putin has picked his favourites for success at the 2018 World Cup and has admitted home nation Russia's main aim will be to stage a tournament to please the millions of football fans.

In an exclusive interview with Shen Haixiong, head of China Media Group, Putin named the main candidates to clinch the coveted World Cup trophy as well as Russia’s chances at their home football tournament.

Putin admitted that, aside from victory in their matches, Russi'a main aim at the tournament will be to stage a tournament to please fans attending the event and the millions watchign around the world.

The interview was recorded on May 31, before the president’s visit to China where he will take part in Shanghai Cooperation Organization meeting.

Discussing Russia’s goals for the tournament off the pitch, Putin stressed that the country’s top priority will be to stage a show that will exceed everyone's expectations.

“Our top goal, as the host country, is to stage the tournament at the highest level and to put up a fantastic show for millions of football lovers from all over the world. This will be our main achievement,” the Russian president said.

“As for the Russian national football team, unfortunately, I have to admit that our players haven’t had great results in recent times. But we are pinning our hopes on them, all the Russian fans hope that the players will put in a decent performance. We hope they will play beautiful football and fight until the end.”

When asked about the favorites to lift the World Cup on July 15 at Luzhniki Stadium, Putin replied that there are many teams that could potentially triumph.

“It’s a difficult question. There are so many contenders to win the World Cup. Latin American teams – Argentina and Brazil are among the favorites," Putin said. "We know that Germany played brilliantly at the last World Cup demonstrating high quality football. Spain also played well showing very beautiful game. I’m sure there will more contenders to win the Cup, but the victory will be taken by the strongest squad.”

Putin will definitely attend two matches at the tournament - the opening game between Russia and Saudi Arabia on June 14, as well as the final, as well as trying to be present at several more games during the month-long tournament.

“As the head of state which hosts the tournament I must attend the World Cup opening game and the final. I will check my work schedule, and I will try to attend other games if it’s possible.”

Talking about his favorite football players, Putin said he can name a few players whom he considers to be the most outstanding footballers of all time.

“There are several players whom I consider excellent and who can be considered amongst the greatest. I can name Lev Yashin among the great Russian players, and Pele among the international footballers. I also like Maradona very much,” he added.