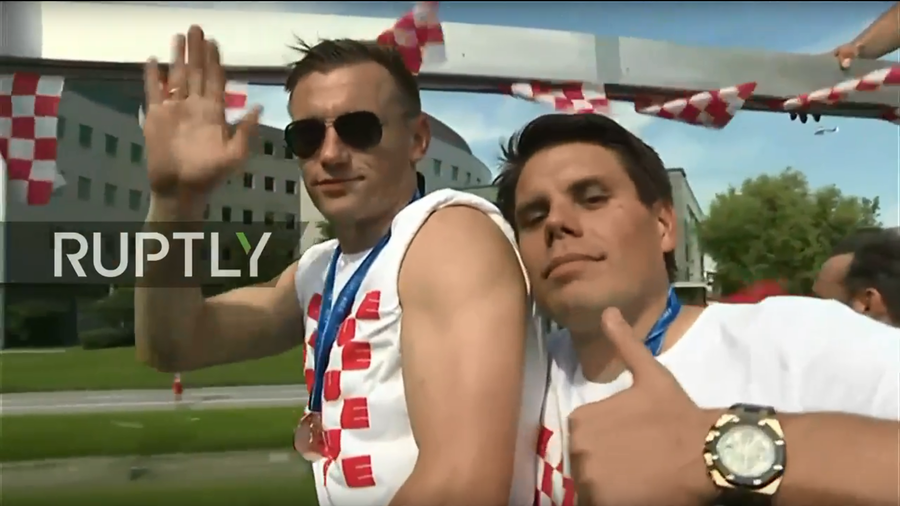 Sacked Croatian assistant coach Ognjen Vukojevic, who was dismissed during the World Cup for a video dedicating the quarter-final victory over Russia to Ukraine, was seen joining in the team’s celebrations on returning home.

Croatia returned to a heroes’ welcome in Zagreb on Monday, in recognition of the team’s historic run to the final in Moscow, where they went down to a battling defeat to France.

The Croatian celebrations on returning home included an open-top bus tour from the airport, during which Vukojevic was seen celebrating with the players – despite being sacked during the tournament for his role in a controversial video in which he dedicated the team’s quarter-final win over hosts Russia to Ukraine.

In the clip, Vukojevic, a former Croatian international, was seen alongside defender Domagoj Vida after the team had secured a dramatic 4-3 penalty shootout win over Russia in Sochi.

Vida was head shouting “Glory to Ukraine,” before Vukojevic added: “this victory is for Dynamo Kiev and for Ukraine."

The pair have previously played for the Ukrainian club, and later apologized for any offense caused to World Cup hosts Russians.

While Vida escaped with a warning from FIFA, Vukojevic was fined 15,000 Swiss francs ($15,150) and was removed from Croatia’s coaching staff by the national football federation.

However, Vukojevic was seen joining in the homecoming celebrations in Zagreb on Monday, appearing with a silver runners-up medal around his neck as players and coaching staff waved at the crowds.

Thousands of Croatians lined the streets from the airport into Zagreb, waiting the national flag and greeting the players with applause and cheers.

It was the first time Balkan nation of just 4.1 million had reached the World Cup final, having previously made the semi-final in 1998, when they again lost to France, who went on to win the tournament on home soil.