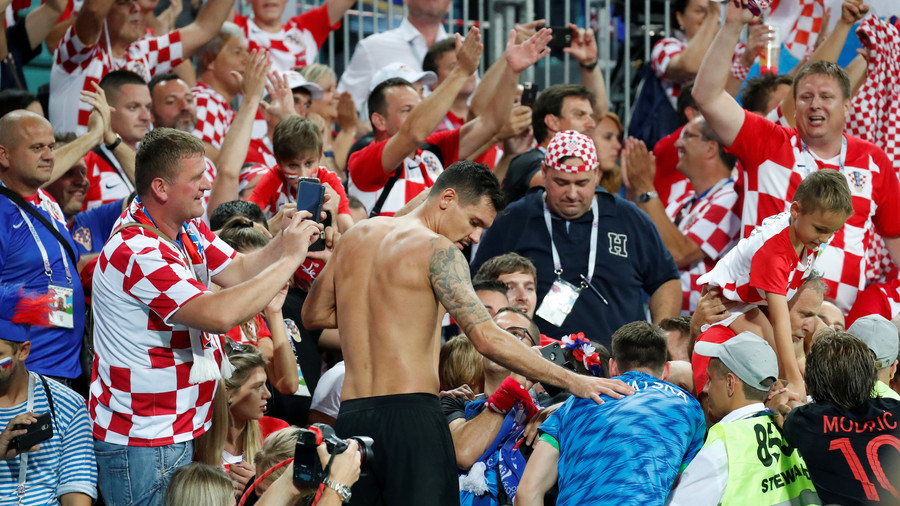 The organizers of the World Cup have admitted Croatian supporters were warned over an incendiary banner, brought in by the supporters to the team's opening game on June 16.

"In this case, where a single banner was held by a single supporter, a warning was issued instead of a fine, because officials from the Croatian football federation informed us ourselves, after identifying it," said Federico Addiechi, FIFA’s Head of Sustainability & Diversity told Tass news agency, which cited the quote in Russian. "They didn't want to hide anything from us, and that is why that sanction was chosen."

According to reports in the Russian media, citing photographs from the match, the fans carried in a modified version of the red, white and blue tricolor of Croatia, adopted by the nationalist radical organization Ustashe, popular in the country from the 1920s to the 1940s, which had fought alongside Nazi Germany in World War II.

The incident was publicized by the Telegraph, a UK newspaper, earlier this week, when it contrasted the clandestine treatment of Croatia with other, public warnings and fines, including one given to Balkan rivals Serbia for their own nationalist banner.

The Croatian national team has a history of association with far-right nationalist movements, as it became a symbol of the country's independence following the break-up of Yugoslavia. Incidents have included nationalist chants, other banners, and a swastika mown into the pitch before a 2015 qualifier.

But the team had been widely admired by neutrals at the World Cup, before political tensions were once again brought to the fore by center back Domagoj Vida and since-sacked scout Ognjen Vukojevic, who recorded a video congratulating Ukraine over their own team's victory over Russia in the quarter-finals.

Vukojevic has been fined by Fifa, while Vida was warned.