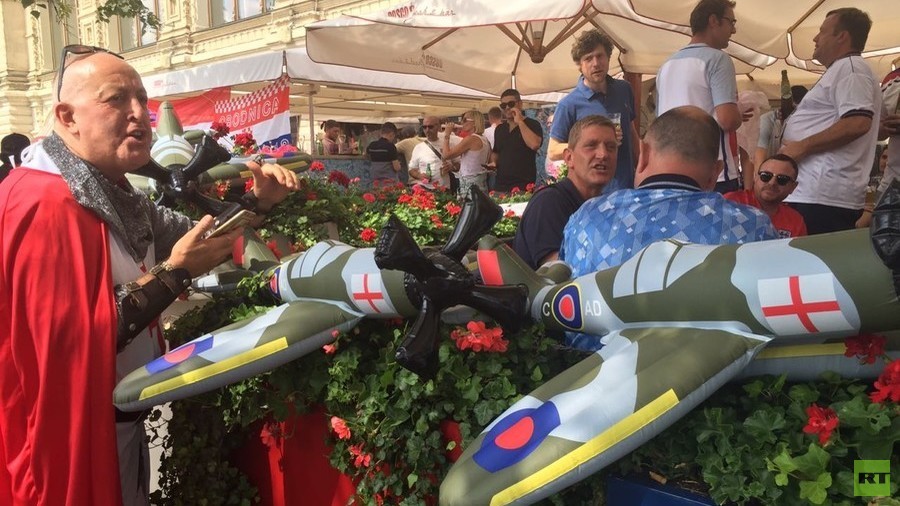 The supporters were gathered in a bar on the Russian capital’s iconic Red Square singing the song ‘10 German bombers’ about the shooting down of Nazi war planes, while waving inflatable planes.

England fans on Red Square, some in full Crusader gear, singing 'There were 10 German bombers in the air, but the RAF from England shot them down', complete with inflatable WWII planes. Really? What a disgrace. #Eng #WorldCup pic.twitter.com/HkW8nmBLub

Elsewhere, fans were also filmed singing the song on nearby Nikolskaya Street, which has become the de facto meeting point for fans during the World Cup; this time inflatable planes were replaced by arm salutes signaling aircrafts.

Crowds gathered in Moscow’s center on Wednesday ahead of the World Cup semi-final match between England and Croatia at Luzhniki Stadium in the city.

The chant has been described as “vile” by UK media, and England fans were criticized for singing the song at friendly with Germany in Dortmund in March last year.

This is why everyone outside England bar a few obvious exceptions wants them to lose https://t.co/2TbPlkaHhM class.

Jesus. This is embarrassing. #eng https://t.co/geEPyxqqjA

There was nothing like that in the previous England games. It looks like the nobs have finally made their way out to Russia

I see the cavemen have arrived to demolish the good atmosphere that’s been built up over the last month. Arseholes https://t.co/6mngRyZmeY

The footage of England fans again singing the song, this time in Moscow, was met with a similar reaction online from England fans and rivals supporters alike.

Following England’s 2-1 group stage victory over Tunisia in Volgograd, the site of a major WWII conflict – the Battle of Stalingrad – England fans were filmed in a local bar giving Nazi salutes and singing a Hitler song in a bar in the Russian city.

British police and the Football Association launched a joint investigation after the footage emerged online showing English fans performing Nazi salutes, shouting “Sieg Heil” and singing songs glorifying the Third Reich. One of those fans was subsequently hit with a football banning order that barred him from attending games for five years by a UK court.