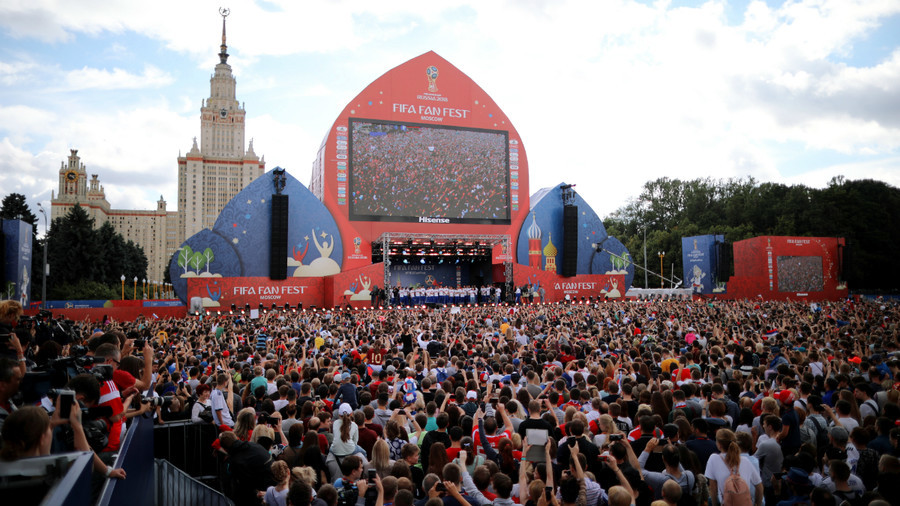 More than 24,000 fans attended a meeting with the national football team in Moscow to thank the players for their historic World Cup performance, which saw them progress to the quarter-finals for the first time in their history.

A huge crowd of people at the FIFA Fan Fest on Vorobyovy Gory greeted the team with thunderous applause and loud chants “Rossiya” and “Spasibo” to mark the Sbornaya’s remarkable accomplishments at the home World Cup.

The players, who suffered a heartbreaking quarter-final defeat on Saturday, unfurled a huge banner reading “We are playing for you” in a tribute to their devoted fans and their passionate support during the tournament.

“It’s a great honor for us to [be here], we are playing for our country with passion. We have proven that Russia is a football powerhouse. Thank you so much,” Russian striker Artem Dzyuba said, TASS reported.

“Yesterday and today I would have experienced the same feelings towards me, if I were in your place,” said Fedor Smolov, sharing the blame for the quarter-final defeat in which he missed a penalty against Croatia. “Thank you for your support, I’m happy to see so many people here. I’m sincerely happy to be a Russian citizen. Only Russian people have such a soul that has no equals in the whole world.”

Russia were knocked out of the tournament by Croatia, who got the upper hand in a nail-biting penalty shootout (4-3) to propel them into the World Cup semi-final.

Team manager Stanislav Cherchesov, who guided his team into the quarter-finals, expressed his gratitude to Russian supporters and promised to deliver an even better performance at the 2020 World Cup in Qatar.

The players and fans sang the national anthem together before the team left the Fan Fest venue to chants of “Thank you.”