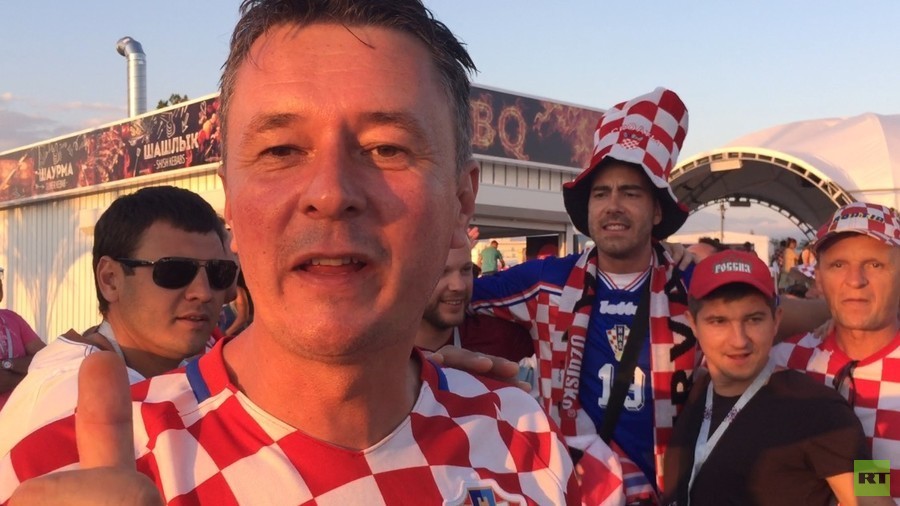 A Croatia fan in Russia for the World Cup has described as “propaganda” scaremongering headlines about Russia, and hailed the country, its people, and the tournament as “number one,” despite warnings that fans shouldn’t attend.

Speaking to RT before his team played Russia in the World Cup quarter-final, Marko, a Croatian living in Australia, said he was a little scared of coming to Russia but the country, its people, and the World Cup had exceeded his expectations.

Marko, a Croatian living in Australia, was told not to come to Russia, says he's traveled the world and is 'in shock' at the humbleness of the Russian people. Calls 2018 'the best #WorldCup ever' #Rus #Cro pic.twitter.com/lrtiNX5UrP

“I mean it: the best ever World Cup, number one World Cup, ever,” said Marko, who was attending the game as part of a larger group of Croatian fans outside Fisht Olympic Stadium in Sochi, on Russia’s Black Sea coast.

“The best people on the planet. But I was a bit scared to come here, and after being here, I experienced something absolutely brilliant, beautiful, brilliant, number one,” he added.

Asked what he thought of such headlines, Marko replied that the reality of such “propaganda” was very different.

“[The headlines are] propaganda. They’re bulls***. It divides people away from each other, but football is the number one thing that connects people together, the best ever,” he said.

Australia is home to around 133,000 citizens of Croatian descent, including former Australian national team striker Mark Viduka, a ‘Socceroos’ legend.

Croatian fans could also be seen in a bar near Fisht Stadium before the game with a banner reading: “Football Against Violence, Discrimination, Racism, Poverty and Hooliganism,” while chanting a popular national song about the strength of Croatia.

Croatia fans with a 'Football Against Violence, Discrimination, Racism, Poverty and Huliganism', outside Fisht, I'm told they are chanting 'my country has the strength of the sea'... #Cro #Rus pic.twitter.com/cTBSmb7e1T

On the pitch, it was Russia who took the lead with a thunderous left-footed strike by Denis Cheryshev, but this was canceled out by an Andrej Kramaric header just nine minutes later.

With the scores level after 90 minutes, extra-time was played, in which Croatia took the lead through Domagoj Vida in the first half, before Mario Fernandes headed a dramatic equalizer in the second half to force a penalty shootout.

In the shootout, Ivan Rakitic stroked home Croatia's winner to make it 4-3 after Fernandes and Fedor Smolov missed for the hosts, despite Mateo Kovacic missing for Croatia, who now go through to face England at Luzhniki Stadium in Moscow in the semi-finals.