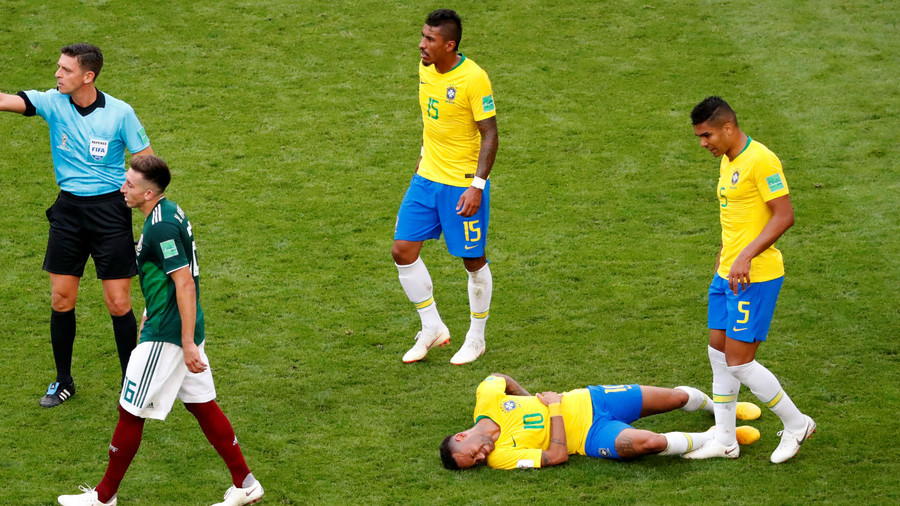 Brazilian forward Neymar has been lauded for some sublime moments at the World Cup in Russia, but he’s also come in for criticism over his perceived play-acting on numerous occasions during his team’s run to the quarter-finals.

Social media was particularly scathing in its assessment of several moments during Brazil’s 2-0 win over Mexico in the last 16.

Neymar hit the deck theatrically following a challenge from Miguel Layun in the second half, subsequently rolling around as if in agony when the defender caught his ankle while trying to retrieve the ball.

Now, statisticians at Swiss broadcaster RTS have calculated that the PSG star has spent 14 minutes of the 360 he has played in Russia so far lying on the turf due to apparent injury.

For the game in Mexico – which many branded the peak of his playmaking so far – he spent a staggering five minutes and 30 seconds on the deck.

However, fellow RT World Cup pundit Jose Mourinho recently said that Neymar was not the only culprit, and that the issue was endemic to the teams in Russia.

In his defence, it could be argued that Neymar has been fouled 23 times in Brazil's four World Cup matches so far. Brazil take on Belgium in their World Cup quarter-final in Kazan on Friday, as they bid to add to their five titles an claim their first since 2002.