'I saw a monumental theft': Maradona in scathing attack after England victory 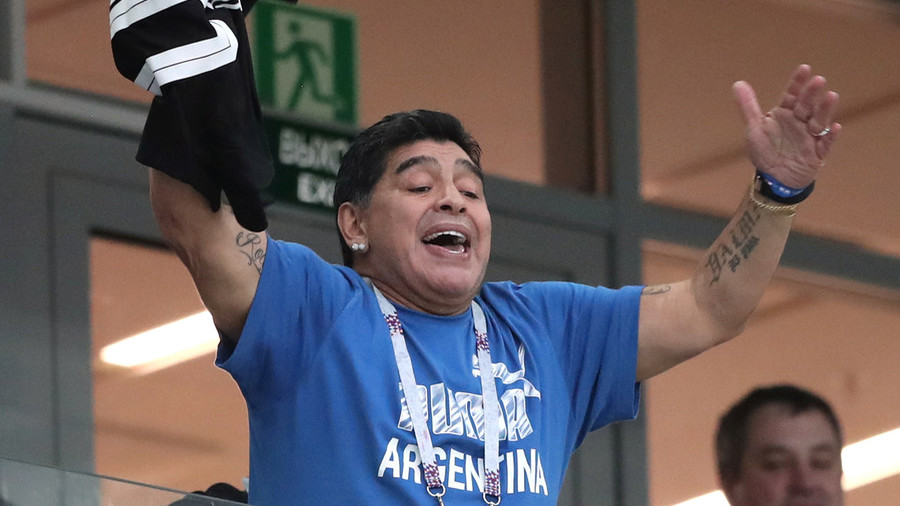 Argentina legend Diego Maradona has declared England's 4-3 penalty shootout victory over Colombia in the last 16 of the World Cup on Tuesday was a ‘monumental theft’ and has demanded an apology for Colombian fans.

“I saw a monumental theft. I apologize to all the Colombian people, but they must know the players are not to blame,” Maradona said on Argentine TV on Tuesday.

The 1986 World Cup winner then went on to criticize American referee Mark Geiger, questioning his appointment for the game and the competence of Pierluigi Collina, the chairman of the referees’ committee, before demanding he too apologize.

“It is the man who decides who the referee is who is to blame. A man like [Geiger] should not be put in charge of a game of that magnitude. With all due respect, Pierluigi Collina, as the man who designates the referees, he is very bad. He must apologise to the Colombian people.

“I told (FIFA president) Gianni Infantino that if I worked for FIFA I would change everything. It has to be transparent. That's why I didn't go there. Twice the English threw themselves to the ground and he did not admonish them. This was theft.”

Maradona famously scored a goal by punching the ball into the England net in their last 16 World Cup match during Argentina’s successful 1986 campaign, and has been viewed as an enemy of English football ever since.

The former Napoli playmaker and football legend has already made headlines at Russia 2018 for his bizarre behavior during Argentina’s group match with Nigeria, in which he appeared to cross himself after Lionel Messi's opener and flipped off members of the crowd in celebration of Marcos Rojo's late winner.

England beat Colombia 4-3 on penalties at Spartak Stadium to book their place in the World Cup quarterfinals versus Sweden in Samara, after normal time and extra time could not separate the side with the scores level at 1-1.