Mystic money: Did this Russian banknote predict Akinfeev shootout save against Spain? 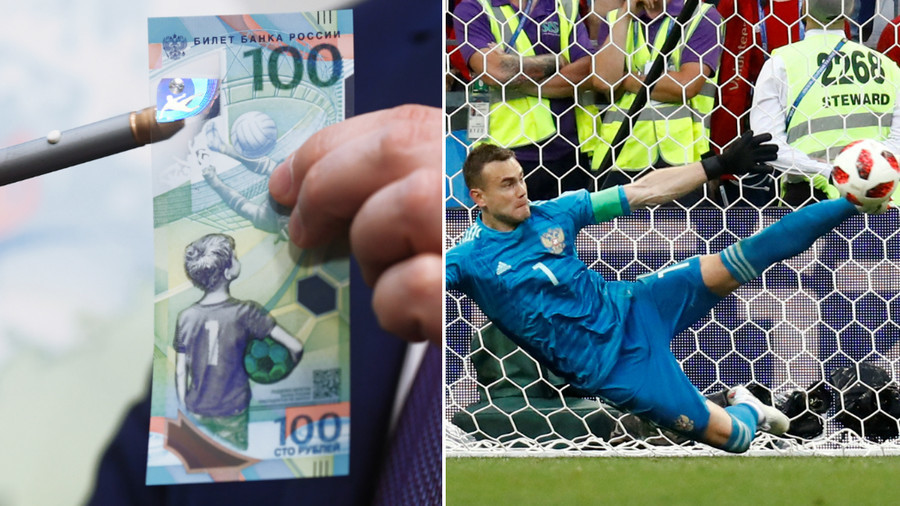 Moments after Akinfeev sprawled himself across his goal to block Iago Aspas’ decisive spot kick at Luzhniki Stadium, eagle-eyed internet users were adamant the specially-made World Cup design 100 ruble banknotes had already predicted his exact save.

On one side of the bill, an outfield player is pictured volleying the ball in a strikingly similar manner to how the veteran Russian stopper kept out the penalty with his left foot, handing Russia a place in the quarter-final stage 4-3 on penalties.

The Bank of Russia, who issue the notes, even took to tweeting on the matter, commenting, "predictions have always been our strong point", on their official Twitter account.

The banknotes were made especially for the tournament and feature legendary Soviet goalkeeper Lev Yashin, to date the only goalkeeper to receive the Ballon d’Or, diving to save the ball.

Some are even claiming Yashin’s pose and the positioning of the ball mirrors the own goal of Sergei Ignashevich, which gave Spain the lead in the 12th minute.

Tussling with Spain captain Sergio Ramos while attempting to defend an incoming free-kick, the ball deflected off the veteran defender’s foot and into the net, making him the oldest World Cup own goal scorer in history.

Each 100 ruble note - worth $1.63 - features a young boy in a goalkeeper’s jersey with a football tucked under his arm while gazing at Yashin, nicknamed ‘The Black Spider’ for his dark attire, sprawling to save a ball.

The image symbolizes the boy “dreaming of emulating the achievements of great footballers” and the “continuation of generations,” according to a Russian Central Bank press release. The trajectory and ball are shown on the flip-side of the note, symbolizing a “globe.”

As a result of Akinfeev’s heroics, Russia will now play Croatia in Sochi on July 7 after they came through in their own penalty shootout against Denmark in Nizhny Novgorod Stadium.