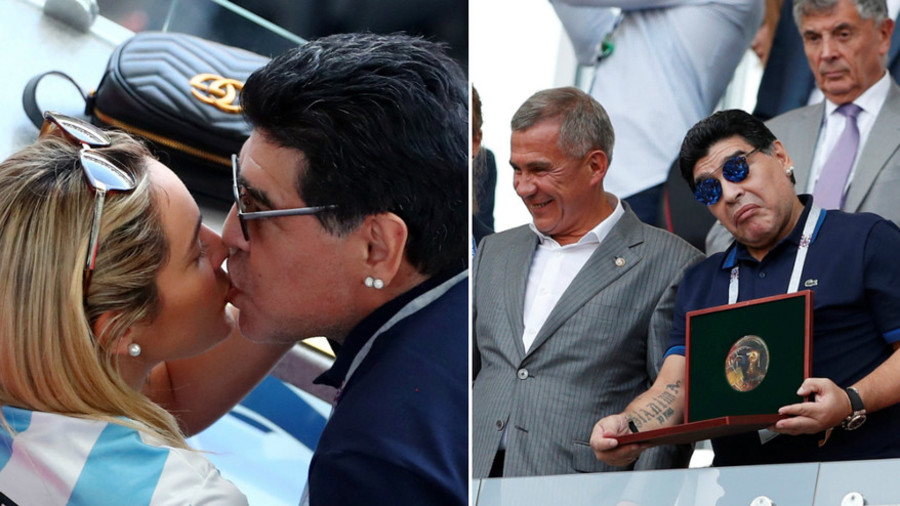 Argentina icon Diego Maradona has been snapped inside Kazan Arena happily kissing a blonde companion and receiving an award from Tatarstan's president. It follows his bizarre outburst in the stands at Argentina's previous match.

Maradona was pictured giving a double middle-finger salute to the crowd after Argentina scored a dramatic last-minute winner against Nigeria to book a place in the last 16 of the tournament.

In Kazan Arena, Maradona seemed to be making the most of his time in the stand at Kazan Arena, the venue for Argentina's crunch knockout stage tie with France; he was pictured receiving an award from the president of the Republic of Tatarstan, Rustam Minnikhanov.

Kazan is the capital of the Russian region of Tatarstan. Maradona was also pictured happily smooching with a blonde companion who was wearing an Argentina jersey with 'Maradona 10' on the back, who seemed more than happy for him to be in the stadium.

Maradona’s outburst at St. Petersburg Stadium at the Nigeria game also saw him appear to bless himself as though possessed when Lionel Messi opened the scoring, and scream at Nigeria fans when The Super Eagles equalized.

In response to his behavior, FIFA competitions director Colin Smith commented: "We know what happened and we hope that all ex-players, players and fans behave in a respectful way."