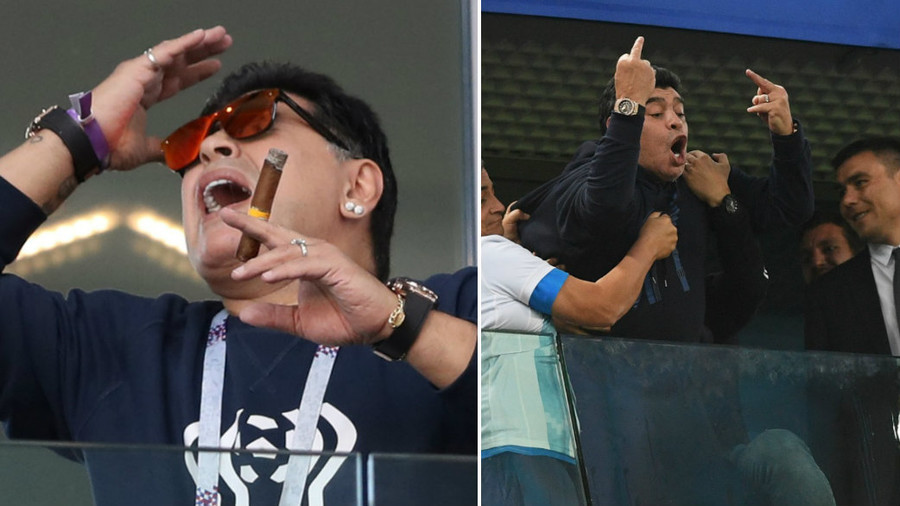 FIFA competitions director Colin Smith has said the organization is aware of Argentina icon Diego Maradona's behavior at his country's crunch match versus Nigeria, which included giving a middle finger salute to fans.

The 57-year-old’s behavior occured during Argentina’s 2-1 win in their final World Cup group game, which sealed their place in the knockout stage when, in celebration of Marcos Rojo's 86th-minute winner in that match, Maradona leaned over a glass partition and flipped off the crowd below.

FIFA competitions director Smith said: "We know what happened and we hope that all ex-players, players and fans behave in a respectful way.

"We have a strong legends program, the players have an important part to play. Diego Maradona is a part of that, we’re aware of what you are referring to, we’d expect all players, staff and fans to behave in a respectful manner.

"Having players like Diego involved… having them together with us is part of a much bigger picture. We see the joy it brings to the fans when the players go onto the pitch before the game."

Maradona, a member of the FIFA Legenads program, had already twice garnered attention in that game; when captain Lionel Messi gave Argentina an early lead, Maradona crossed his arms over his chest and appeared to bless himself while chanting towards, with his eyes rolled into the back of his head, leading observers to remark that he had been “possessed.”

The 1986 World Cup winner also appeared to scream at supporters when Nigeria equalized. The rollercoaster of emotons appeared too much for Maradona at the final whistle, as he was helped from his seat, apparently unable to walk under his own strength.

In a later Instagram post, Maradona denied reports he had been taken to hospital, and  assured fans he had merely "hurt his neck," and therefore required assistance.

“In the halftime of the game against Nigeria, my neck hurt a lot and I suffered a decompensation. I was checked by a doctor and he recommended me to go home before the second half, but I wanted to stay because we were risking it all," he said.

Editor's note: RT earlier reported that Diego Maradona had been threatened with a World Cup 2018 stadium ban by FIFA, based on reports from South American media. Those reports were later rejected by FIFA.