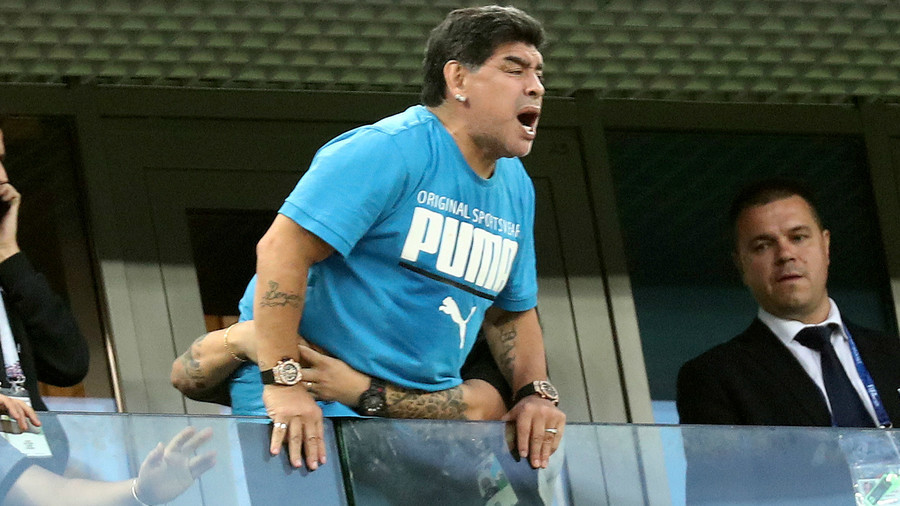 Football superstar Diego Maradona has promised a $10,000 reward for helping him to track down a person who spread rumors about his death. The hoax suggested that the legendary player had passed away after a heart attack.

The rumors about Maradona’s death began circulating in the media shortly after the Argentina v Nigeria game on June 26, when the football legend had to be assisted from the VIP box in St. Petersburg stadium by medical staff after witnessing his team narrowly progress to the knock-out stage of the World Cup. Someone posing as an Argentinian journalist later said in a WhatsApp recording that the 57-year old had died in a hospital after his heart failed, and an attempt to revive him using an adrenaline injection was unsuccessful.

Maradona personally dismissed the rumors of his demise on Instagram, saying that doctors had indeed checked him and advised him to go home early, but he chose to stay and watch the crucial game. He also blamed drinking too much white wine at half-time for his appearance and behavior at the match.

Now the former Argentinian captain seems to be very serious about getting to the bottom of his death hoax.

“I gave instructions to make public the decision to offer a reward of 300,000 pesos ($10,000) to anyone who can provide true and accurate information about the author of the audios,” Maradona’s lawyer Matias Morla told Argentinian newspaper Clarin on Thursday.

As of today, not much information is known about the perpetrator of the hoax, except that he spoke Spanish with an Argentinian accent.

The false rumors of Maradona’s death caused distress to the superstar’s family and friends. “Maradona's sisters heard the news and couldn't contact me or their brother. One of them ended up collapsing,” his lawyer said. “We can't let things like this go unanswered.”

Diego Maradona played in four FIFA World Cups, winning the tournament with Argentina in 1986. He later managed the national team for two years.