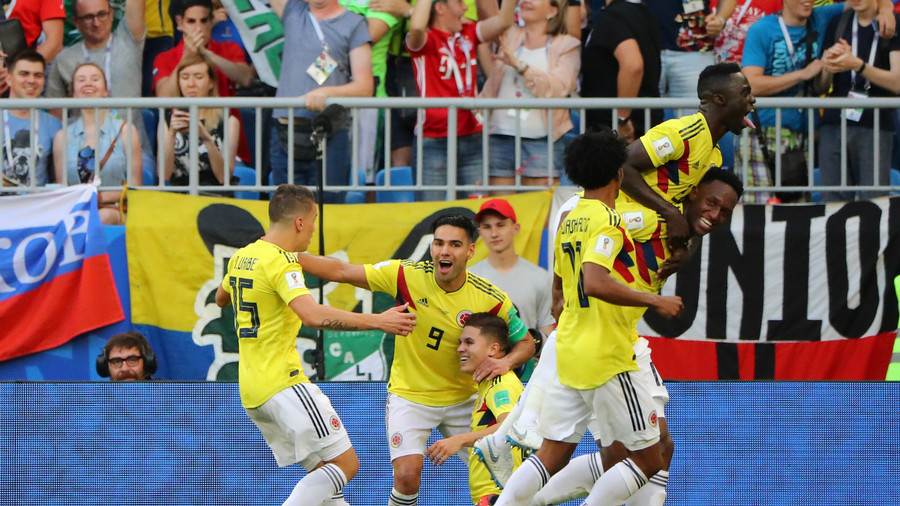 A Yerry Mina goal earned Colombia a 1-0 win over Senegal and booked their place in the World Cup last 16, as the African nation suffered the agony of going out by virtue of collecting more yellow cards than Group H rivals Japan.

Colombia’s win put them top of the group on six points from their three games, while Senegal and Japan – who suffered a 1-0 defeat to Poland – were level on four points and had exactly the same goal difference, meaning Japan’s superior discipline record sent them through.

For Colombia, the result marked relief after a second win in two games following their shock opening defeat to Japan - although they were forced to battle hard for the win against an organized and industrious Senegal team.

After an even opening at Samara Arena, Colombia’s Juan Fernando Quintero first tested Senegal keeper Khadim N’Diaye on 12 mins, drawing a low stop from a free-kick.

However, the call was referred to VAR and Serbian referee Milorad Mazic overturned the decision, ruling that the Tottenham defender had got a touch on the ball in a last-ditch tackle.

Colombia continued to enjoy most of the ball, but rarely looked like troubling the Senegal backline, despite Radamel Falcao heading over on 25 minutes from an offside position.

The Colombians suffered a blow when striker James Rodriguez – the Golden Boot winner in Brazil four years ago – was forced off injured on the half-hour mark, to be replaced by Luis Muriel.

Senegal continued to look dangerous on the break and had a burst of chances through Keita Balde and Ismaila Sarr, but both fired weakly at David Ospina in the Colombia goal.

Defender Salif Sane had a free-kick on 37 mins but fired over the wall as both teams struggled to find their range.

With Senegal able to settle for a draw, the onus was on Colombia to break the deadlock and they started to display the necessary urgency at the start of the second half, but the Africans looked well-organized and resolute.

News filtered through that Poland had taken the lead against Japan, a result which would have seen both teams through with a draw, but they pressed for the winner regardless – despite the exhortations of Senegal coach Aliou Cisse for his team to slow the tempo.

Senegal had a free-kick from a good position on 63 minutes, but Mane continued the trend of woeful finishing when he slipped in the run-up and shot well over.

Muriel had a shot deflected wide on 65 minutes, and Falcao headed over from the resulting corner, but Colombia finally got the breakthrough on 74 minutes when Yerry Mina powered home a header from a corner.

That spurred Senegal to press forward desperately, and Ospina saved from Niang before making a smart stop soon after as Mina almost headed in at the wrong end.

Ismaila Sarr fired over when free at the backpost, but Senegal failed to make the breakthrough they needed to reach the last 16.

The defeat left the Senegalese level on four points with Japan and with exactly the same goal difference, meaning progression depended on the teams’ disciplinary record in Russia – with Japan progressing by virtue of receiving two fewer yellow cards than the Africans.

For Colombia and their army of yellow-shirted fans, they will march on to the last 16, where they will face either England or Belgium.