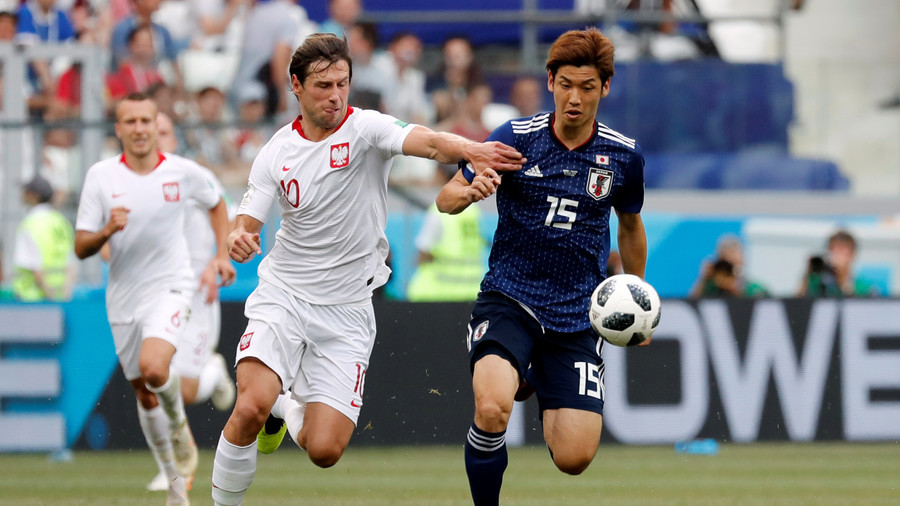 Japan qualified for the round of 16 by virtue of recording two fewer yellow cards than Senegal, finishing second in Group H despite surrendering to Poland at Volograd Arena.

A Jan Bednarak goal was enough to claim Poland’s first points at Russia 2018, but the game ended in unusual circumstances as the Japanese, aware of the scoreline in the other group game between Colombia and Senegal, knew that as things stood they would qualify so instead of pursuing a late equalizer they withdrew into their own half and kept the ball amongst themselves.

The game began at a slow pace. Japanese coach Akira Nishino opted to not field the creative trio of Shinji Kagawa, Keisuke Honda and Takashu Inui, instead selecting more defensive-minded players in the knowledge that, so long as they avoided a loss, their place in the last 16 was assured.

Despite Poland appearing lethargic in the opening frame, Nishino’s decision came very close to backfiring when Southampton defender Jan Bednarek converted a Kurzawa free-kick with a deft touch of his left foot. The scoreline, coupled with the 1-0 advantage that Colombia had versus Senegal, meant that the African side were tied with Japan in the standings on four points, both with four goals scored and four goals conceded.

However, because Japan had received two fewer yellow cards than Senegal, a FIFA tiebreaker rule dictated that it would be the Asian side who would progress and while this appears good on paper, on the pitch it led to Japan knowing that if they either conceded a goal or committed a foul worthy of a yellow card they were going home - so they essentially stopped playing and settled for the 1-0 loss.

Poland appeared uninterested in pushing forward too, apparently content with registering their sole win at Russia 2018.

The ending to the game left a strange taste in the mouth of its audience, and it was the type of ‘anti-football’ climax to a game that FIFA has been trying to avoid ever since it made the decision to hold all final group matches simultaneously.

In the end it had the feeling more of an international friendly than a fixture on football’s grandest stage, and the Senegalese may justifiably feel aggrieved that they exited the tournament under these particular circumstances.