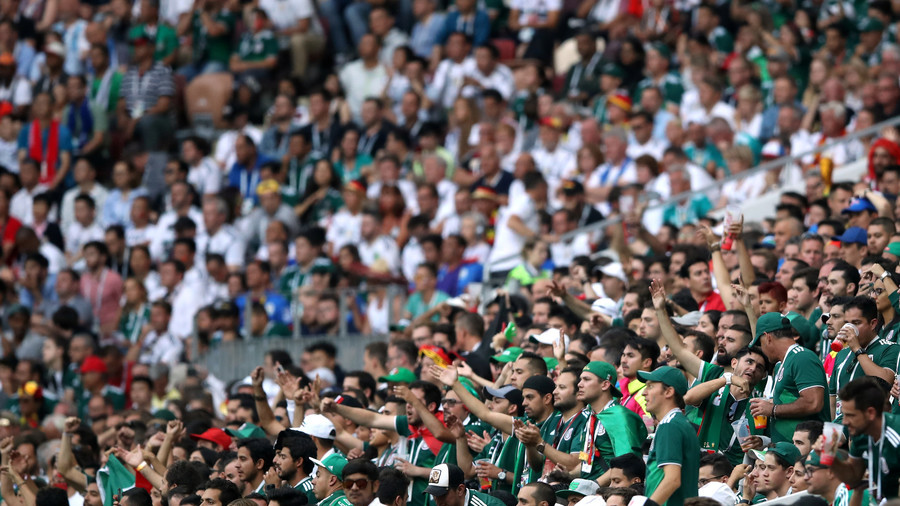 Get short URL https://on.rt.com/9848
Mexico fans at the Luzhniki stadium in Moscow. / Reuters

“The decision was passed after a thorough assessment of the relevant match reports, the FMF’s precedents and the evidence provided. The evidence included videotapes of the incidents and examples of certain sustainable actions taken by the FMF to raise awareness among its supporters,” said a statement from FIFA.

The chant, in which Mexican supporters shout “Puto!” (homosexual male prostitute) at the opposition goalkeeper as he prepares for a goal kick, was labeled “discriminatory and insulting.”

The Mexican football federation was fined over a dozen times during its qualification for Russia 2018, including for the same chant, and FIFA says that fines may not be the last of it.

“The Disciplinary Committee gave a warning to the FMF, who may face additional sanctions in case of repeated infringements of this type,” said FIFA.

Earlier, striker Javier Hernandez became the latest player to urge supporters, who have otherwise been a vibrant and friendly presence in Russia, to drop the chant in order to avoid more sanctions.

The chant, which went unpunished at the World Cup, has become a subject of national debate, with some fans and even players dismissing it as harmless banter, while others insist it is a relic of the past that tarnishes the country’s image.

'He who doesn't jump is a Chilean 'maricón' (faggot)'Mexicans with homophobic chant in packed Ohotniy Ryad underpass in Moscow. They have been previously warned by FIFA for homophobic language at matches#WorldCup pic.twitter.com/tf3qpth82h

After the game versus Germany at Luzhniki Stadium, 'El Tri' supporters were also filmed in central Moscow, chanting a song with the lyrics, "he who doesn't jump is a Chilean maricón". Maricón is a Spanish slur for a homosexual.

Additionally, FIFA fined Serbia, another repeat offender, 10,000 francs for a far-right banner that was displayed by the fans during the team’s opening-round victory over Costa Rica.