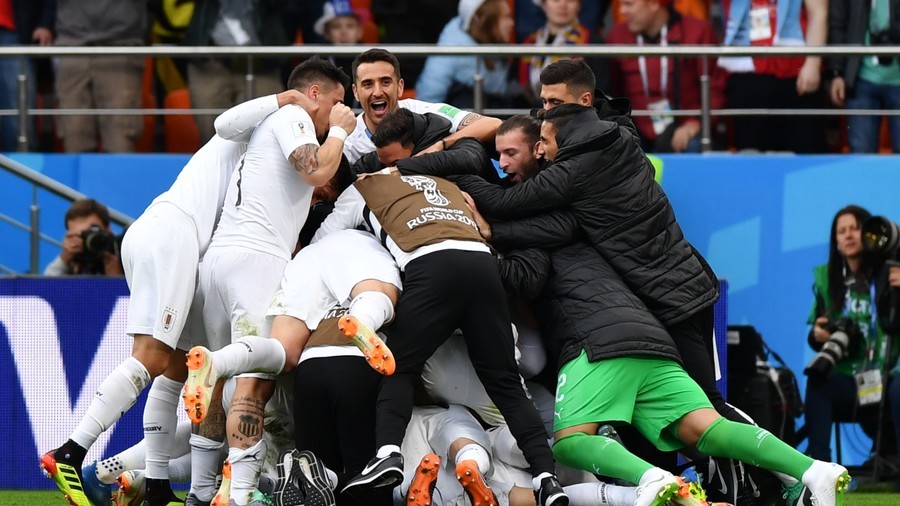 Uruguay made their class tell late on in their opening Group A match against a bright Egypt, for whom star man Mohamed Salah failed to come off the bench.

Atletico Madrid center Jose Gimenez rose high to unstoppably head in a free kick in the 89th minute, to put an end to a contest marked by wastefulness from Uruguay’s star strikers Luis Suarez and Edinson Cavani.

What a finish! #WorldCup@Uruguay leave it late, but do enough to get the win. #EGYURU 0-1 pic.twitter.com/UmKN1f6YwO

Although the camera at Ekaterinburg Arena frequently panned to Liverpool's Salah, who had been declared fit before the match in what may have been a piece of tactical subterfuge, his countrymen started dynamically, with South American Group A favorites failing to find a rhythm.

Coached by the veteran Argentinian coach Hector Cuper, last year's African Cup of Nations finalists played staunch defense, but missed a cutting edge against the experience Uruguayans, who played in the semi-finals at South Africa 2010, and reached the play-off stage four years ago in Brazil.

But despite the frustration evident on the faces of its two main attackers, who have over 90 goals for the national team between them, the South Americans began to push harder mid-way through the second half.

PSG's Cavani had a powerful volley saved, and hit the post from a free kick before 23-year-old Gimenez made his decisive contribution to add to a trademark clean sheet.

Salah looked disconsolate, and will surely get on the pitch against Russia, whom they will face in St. Petersburg on Tuesday. Uruguay will play Saudi Arabia, who come in with no points, in Rostov on Wednesday.